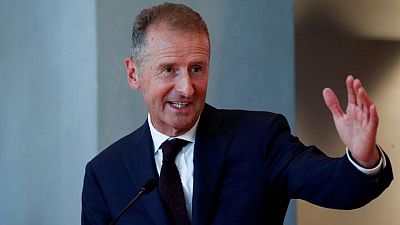 MUNICH – Volkswagen Chief Executive Herbert Diess on Monday said that Europe’s largest carmaker still had its work cut out to become a maker of automotive software, a key aim of his strategy to transform the company.

Volkswagen has bundled all its software efforts into one unit, Cariad, hoping it can challenge Tesla and Alphabet in a field that it has not traditionally been active in.

Diess’ comments reflect the pressure faced by Cariad CEO Dirk Hilgenberg to create a world-class automotive software champion virtually from scratch in a market where corporations battle for talent.

One way to achieve that was to grow via acquisitions, Hilgenberg told journalists on Monday. “But it has to be digestible,” he said, adding that deals involving firms with staff of around 1,000 would still fit that criterion.

Cariad, which is receiving an average of 2.5 billion euros ($3 billion) of investments per year from parent Volkswagen, currently employs 4,500 and targets 5,000 employees by the end of 2021, Hilgenberg said.

Hilgenberg said the war for talent was intense, adding that Cariad was looking for specific software competence in the United States and China that it could not find in Europe, a task that requires financial firepower.

“In terms of resources the situation is still very good at the carmakers,” he said.