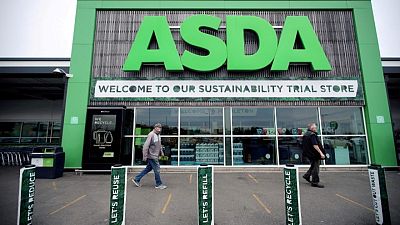 LONDON -British supermarket Asda said on Friday it would roll out nearly 230 stores on petrol station forecourts as it reported a 0.7% drop in like-for-like sales, excluding fuel, in its second quarter.

The supermarket said the fall reflected the exceptional sales levels seen a year ago during the first COVID-19 lockdown and like-for-like sales for the period between April 1 and June 30 were up 3.1% on the same period in 2019 before the pandemic.

Asda, which trails leader Tesco and Sainsbury’s in market share, was sold to billionaire brothers Mohsin and Zuber Issa and private equity group TDR Capital by Walmart Inc in February.

It said on Friday it would launch 28 ‘Asda on the Move’ convenience stores in partnership with the Issa’s petrol station business EG Group this year and up to 200 sites next year.

Asda will supply the products on a wholesale agreement to EG Group, which will own and operate each site on its forecourts, it said.

The new owners said they would target the convenience sector, in addition to growing Asda’s large stores and online business, when they bought the company.

The Issa brothers said Asda had proved to be “incredibly resilient” in 2021 as customers continued to eat more at home.

“Our plans to rollout ‘Asda on the Move’ will bring Asda to new customers, enabling them to pick up food-to-go, essentials for an evening meal, or treat themselves to premium Extra Special products from a range of convenient locations,” they said.