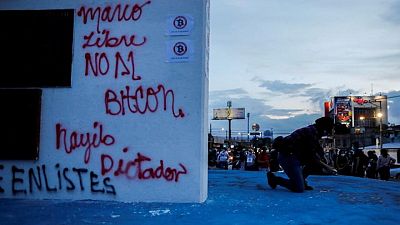 SANSALVADOR – Most Salvadorans disagree with the government’s decision to adopt bitcoin as legal tender, with many unaware of how to use the digital currency and distrustful of the project, a poll by the Central American University (UCA) showed on Thursday.

At least 67.9% of 1,281 people surveyed said they disagree or strongly disagree with the use of bitcoin as a legal tender, said the poll by UCA, a Jesuit university based in El Salvador. Just over 32% of people said they agree on some level.

The study was issued days before the government is due to formalize the cryptocurrency as legal tender in El Salvador on Sept. 7, a plan announced by President Nayib Bukele in June.

UCA‘s poll, carried out in August, also showed that 9 out of 10 people did not have a clear understanding of bitcoin, and 8 out of 10 said they had little or no confidence in its use.

Most people, 7 out of 10, thought lawmakers should repeal the law that makes it legal tender.

“What we can see in this survey, in addition to this broad rejection of the implementation of bitcoin as legal tender, is that for the first time we found a significant disagreement between the population and decisions being made by the Legislative Assembly and the president,” said UCA dean Andreu Oliva.

The government did not immediately respond to a request for comment on the poll. Bukele and his government have presented the measure as a way to boost jobs and economic development by making El Salvador less reliant on U.S. dollars, the current legal tender.

The survey also showed most Salvadorans think the main beneficiaries will be the wealthy, foreign investors, the government and business leaders.

“There is a lot of concern about the possible negative effects of using bitcoin,” said Oliva.