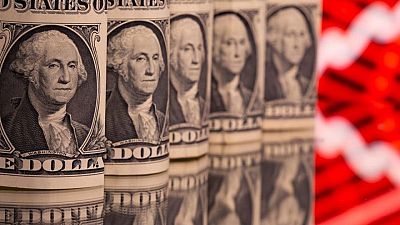 LONDON -The euro held near a one-month high versus the dollar on Thursday and a six-week peak against the pound, supported by hawkish comments from ECB policymakers after data showed inflation at a decade high and on signs the Fed is not hurrying to tighten policy.

The dollar has been on the defensive over the past couple of weeks as doubts have crept in about when the Federal Reserve will start unwinding its stimulus. Fed chair Jerome Powell said last Friday the jobs recovery would determine the timing of asset purchase tapering.

Dovish comments from Powell and other Fed policymakers in addition to data misses have seen the greenback index lose around 1.4% versus a basket of currencies since hitting nine-month highs on Aug. 20.

The index was marginally weaker at 92.452 by 0945 GMT, not far off a four-week low of 92.376 touched the previous session after soft ADP payrolls figures and ISM manufacturing surveys.

The euro has in contrast witnessed supportive data flow, including strong manufacturing growth and inflationary pressure from supply-chain snarls.

Fresh figures on Thursday showed factory gate prices in the 19-country euro bloc rose 2.3% month-on-month for a 12.1% year-on-year surge, well above what was forecast. That follows Wednesday data showing inflation rose 3% year on year in August, the highest in a decade.

It was also buoyed on Wednesday by comments from a slew of European Central Bank hawks including Austria’s Robert Holzman and Bundesbank boss Jens Weidman.

However, the euro did not advance further and stayed off one-month highs of $1.1857. It also kept off the one-month high of 130.44 yen touched on Wednesday and the six-week peak against the pound of 86.02 pence.

Investors say it could struggle to make headway, possibly because ECB guidance has suggested asset purchases will continue until rate hikes are necessary.

“Leveraged funds were short euro-dollar so since Jackson Hole we have seen some of those shorts being covered, but the move doesn’t look violent and there are still decent numbers of people looking to go short again,” said Stephen Gallo, European Head of FX strategy for BMO Capital Markets.

“As long as the dollar doesn’t have a reason to weaken, I don’t think the euro on its own will break out significantly to the top side.”

That reason could come on Friday when U/S. non-farm payrolls data is due. A Reuters poll forecasts 728,000 jobs were added in August. The numbers will follow a disappointing ADP jobs reading on Wednesday that showed 374,000 hirings last month against a forecast for 613,000.

“Given the dollar flow, one could argue that the market is now positioned for NFPs to come in modestly below expectations – perhaps in the 550,000-600,000 range,” said Chris Weston, head of research at broker Pepperstone in Melbourne.

Moves across currency markets were subdued ahead of Friday’s jobs data and figures later on Thursday on U.S. weekly jobless benefits claims.