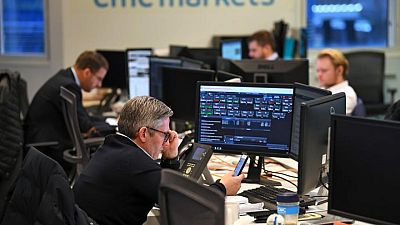 -Online broker CMC cut its annual profit guidance by up to 80 million pounds ($110 million) on Thursday after market volatility eased from extreme levels earlier in the pandemic, triggering a 27% fall in its share price.

CMC, which lets investors trade complex financial instruments on its platforms, said overall market activity had been subdued over the last couple of months, leading to lower trading volumes across new and existing clients.

The company’s stock dived 27% to its lowest in more than a year on the London Stock Exchange by 1000 GMT, heading for its worst day since late 2016.

“CMC cannot escape the slowdown in trading activity,” Peel Hunt analysts wrote in a note. Among reasons for the drop, it cited clients taking holidays after the easing of pandemic curbs, meaning they have less money to spend on investing as well as less time.

CMC and the broader sector profited from high volumes as fears over the economic impact of the health crisis spurred volatility, while a so-called “GameStonk” retail trading frenzy on Wall Street during the lockdowns also aided.

Activity has slowed as government support measures and vaccinations mitigated concerns about a prolonged economic slowdown. The CBOE volatility index, or Wall Street’s fear gauge, fell to 16 from a peak of 85 last year.

CMC, which had expected more than 330 million pounds in net operating income for its fiscal year through March, now says it will be between 250 million and 280 million pounds.

Client numbers remain up around a third from pre-pandemic numbers, while assets under management are near record levels, the company said.

Operating costs for the current year will be moderately higher, although they will be partly offset by lower marketing costs because of lower activity, CMC added.