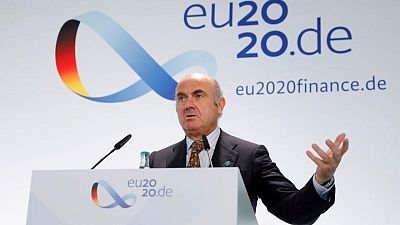 FRANKFURT – The euro zone economy is growing quicker than earlier predicted and the European Central Bank will factor this into its policy decisions, ECB Vice President Luis de Guindos told a Spanish newspaper.

As borrowing costs stay extra low and the euro zone has largely avoided the worst of the pandemic’s Delta variant, several policymakers have called for a reduction in emergency bond purchases as soon as next week, in preparation for their end next March.

“The economy is performing better in 2021 than we expected, and this will be reflected in the projections that will be published in the coming days,” El Confidencial quoted de Guindos as saying on Wednesday.

“We will have new projections in the coming days and will take our decisions accordingly,” de Guindos said.

On Sept. 9, the ECB will have to decide on the pace of bond purchases for the coming quarter. While de Guindos did not offer a view on the pending move, he argued that the robust recovery paves the way for the eventual withdrawal of copious support.

“If inflation and the economy recover, then there will logically be a gradual normalisation of monetary policy, and of fiscal policy, too,” he added.

Inflation surged to 3% in August, well above the ECB‘s 2% target and de Guindos predicted a further rise before a drop in 2022.

The ECB has so far maintained that temporary factors are behind quickening inflation and once they pass price growth is likely to languish below the ECB‘s target for years to come.

But de Guindos also warned that some of this surge could seep into underlying inflation, warranting the ECB‘s attention.

“We have to check that there are no second-round effects, because that would mean this temporary impact would become structural,” he added.