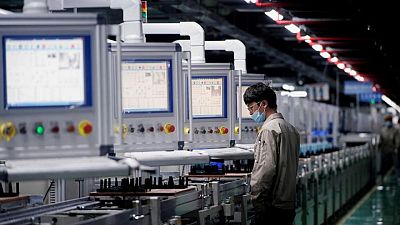 BEIJING – China’s factory activity slipped into contraction in August for the first time in nearly 1-1/2 years as COVID-19 containment measures, supply bottlenecks and high raw material prices weighed on output in a blow to the economy.

The slowdown in the manufacturing sector underscores the fragility of the ongoing economic recovery and the impact of strict coronavirus curbs in the country, backing expectations Beijing will roll out more support measures to revitalise growth.

The Caixin/Markit Manufacturing Purchasing Managers’ Index (PMI) fell to 49.2 last month, from 50.3 in July, breaching the 50-mark that separates growth from contraction.

The result was well below expectations by analysts polled by Reuters, who had forecast the index at 50.2. New export orders tumbled into contraction for the first time since February, while factories laid off more workers than they hired.

“The latest COVID-19 resurgence has posed a severe challenge to the economic normalization that began in the second quarter of last year,” said Wang Zhe, senior economist at Caixin Insight Group, in comments released alongside the data.

Many analysts expect the central bank to deliver a further cut to the amount of cash banks must hold as reserves later this year to lift growth, on top of July’s cut which released around 1 trillion yuan ($6.47 trillion) in long-term liquidity into the economy.

A sub-index for production fell to 47.7, the slowest pace of expansion since February last year at the height of the pandemic, while another sub-index for new orders slipped to 48.0.

A shortage of chips has also been crimping manufacturing.

“Due to the lack of chips this year, the demand for auto parts has decreased,” said an auto parts exporter in eastern China’s Suzhou surnamed Huang.

“Our factory has been continuously reducing production, and in July and August, I heard that some factories stopped production. At the moment it looks like chips will continue to be in short supply,” he said.

An index of confidence in the year ahead stood steady. Input and output prices continued to rise and at a faster pace.