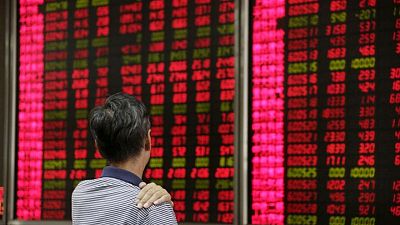 NEWYORK/LONDON -A gauge of global equities posted its seventh consecutive month of gains and a record closing high on Tuesday, but stocks and the dollar mostly ended the day little changed after U.S. and Chinese economic data suggested slower growth ahead.

Markets were subdued in quiet end-of-summer trading as investors wait for a U.S. jobs report for August on Friday that could shape how soon the Federal Reserve begins to withdraw its support of the economy when it begins to taper bond buying.

Data on Tuesday wasn’t inspiring. U.S. consumer confidence fell to a six-month low in August as soaring COVID-19 infections and rising inflation dampened the economic outlook, a view that data from China, Canada and the EU also implied.

China’s businesses and the broader economy came under increased pressure in August as factory activity expanded at a slower pace and the services sector slumped into contraction. In Canada, the economy unexpectedly shrank 1.1% in the second quarter on an annualized basis.

The Delta variant has cast a shadow on U.S. consumer optimism, which had soared earlier in the year on expectations coronavirus vaccines would bring a return to normalcy, said Jim Baird, chief investment officer at Plante Moran Financial Advisors.

“Consumers are increasingly aware of the near-term risks to the economic recovery created by rising prices and the COVID-19 resurgence,” Baird said in a note. But confidence is relatively high and consistent with solid consumer spending, he said.

“The Delta variant’s impact on the U.S. economy might be greater than initially anticipated and that won’t bode well for third-quarter spending,” he said.

Markets mostly shrugged off a surge in euro zone inflation to a 10-year high in August, with further rises likely, as the European Central Bank’s narrative of temporary inflation and ultra-easy policy for years remained intact.

MSCI‘s all-country world index eked out a third straight record closing high, ending up 0.06% at 741.27, and also made August its seventh month of consecutive gains.

The STOXX Europe 600 closed down 0.38% but the broad pan-European index notched its seventh straight month of gains in its best monthly winning streak since 2013. Technology was the best performing European sector in August, up 6% on several strong earnings reports.

Value fell slightly less than growth stocks, a change from Monday when technology shares jumped after Fed Chair Jerome Powell indicated last week that interest rates would remain low well past the date the Fed begins to taper its buying of bonds.

The dollar slipped to its lowest level in more than three weeks against a basket of currencies as investors awaited U.S. jobs data on Friday that could shape future Fed monetary policy. The greenback later pared losses to trade little changed.

Benchmark German bond yields rose to the highest in more than five weeks after a higher-than-expected inflation reading and an ECB policymaker called on the bank to reduce its emergency bond purchases as soon as the fourth quarter.

Oil slipped as the Organization of Petroleum Exporting Countries and its allies geared up for a meeting on Wednesday amid calls from the United States to pump more crude, though Brent still traded well above $70 a barrel.