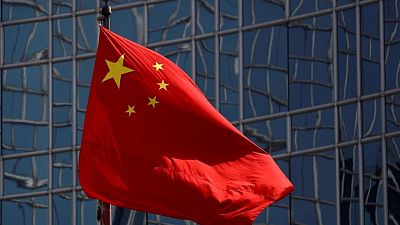 SHANGHAI – China has launched a multi-pronged attack on its tech companies, threatening to curb their ability to list in the United States, seeking to tighten up regulation of their use of algorithms and sidelining their cloud computing businesses in a major city.

In another move amid a wave of regulations on the tech sector announced in recent months, Beijing has also cracked down https://www.reuters.com/world/china/china-crack-down-chaotic-online-fan-culture-2021-08-27 on what it described as a “chaotic” celebrity fan culture, imposing new restrictions on already tightly controlled content in China.

The moves further clip the wings of Chinese tech behemoths such as Alibaba Group and Tencent Holdings and have unnerved investors, hammering Chinese shares traded at home and abroad.

Chinese tech firms have raised billions of dollars in overseas listings, particularly in the United States, as Beijing for years pursued a more laissez faire approach to the industry.

Now China is framing rules https://www.reuters.com/technology/china-plans-ban-us-ipos-data-heavy-tech-firms-wsj-2021-08-27 to ban internet firms whose data is deemed to pose a potential security risk from listing abroad, a person familiar with the matter said.

The new rules would also put an emphasis on the legal responsibility of underwriters in overseas listings and require a more thorough disclosure of shareholdings for those with so-called variable interest entities (VIE) structure.

The VIE structure, used widely by tech firms, was created two decades ago to circumvent rules restricting foreign investment in sensitive industries such as media and telecoms.

As China’s tech sector has grown in size and prominence so Beijing has become increasingly wary of its influence and the mountains of data it controls.

In a move https://www.reuters.com/technology/tianjin-asks-govt-firms-move-data-out-alibaba-tencent-clouds-document-2021-08-27 underlining that concern, Tianjin, a city of 14 million lying south of Beijing, told companies controlled by the municipality to migrate data from clouds run by private operators like Alibaba and Tencent to a state-run system by September 2022, a document dated Aug. 12 showed.

Shares in Alibaba, China’s biggest cloud service provider, closed 4% lower in Hong Kong on Friday. Its U.S.-listed shares were down more than 3% in pre-market trade in New York.

Chinese technology stocks have seen tens of billions of dollars wiped off their stock market valuations since Beijing commenced its crackdown on the sector in November 2020 with the shock halt of Ant Group’s IPO, billed as the world’s largest share sale. Since then, the tech sector has dropped nearly 20%.

The Cyberspace Administration of China said on Friday it was also tightening oversight of algorithms https://www.reuters.com/technology/china-issues-draft-guidelines-internet-recommendation-algorithms-2021-08-27 used by tech firms, telling them to act fairly and not use algorithm models that entice users to spend cash in a way that could disrupt public order.

The guidelines include a proposal to let users turn off algorithm recommendation services, giving consumers a greater say over an area of the internet that has also been the target of authorities in the United States and Europe.

“This policy marks the moment that China’s tech regulation is not simply keeping pace with data regulations in the European Union but has gone beyond them,” said Kendra Schaefer, head of tech policy research at Beijing-based consultancy Trivium China.

China also cracked down https://www.reuters.com/world/china/china-crack-down-chaotic-online-fan-culture-2021-08-27 on what it described as a “chaotic” celebrity fan culture, barring platforms from publishing popularity lists and regulating the sale of fan merchandise.

Online celebrity fan clubs have become widespread in China. The Paper newspaper has projected that China’s “idol economy” could be worth 140 billion yuan ($21.59 billion) by 2022.

The clubs have been criticised for their influence over minors and for causing social disorder in China, which already has stringent rules on content, from video games to movies and music. Beijing censors anything it believes violates core socialist values.