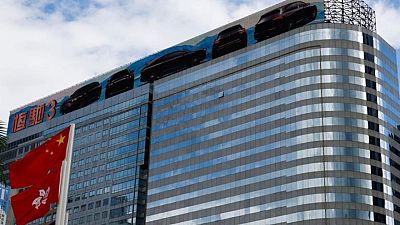 HONGKONG -Too big to fail or too tough to save? As China’s debt-laden No. 2 property developer lurched from one crisis to another in recent months its creditors, investors, suppliers, and bankers agonised over its fate with little hope on the horizon.

But industry watchers say clear signs are now emerging that authorities at various levels are stepping in to avoid a hard landing for China Evergrande Group, amid worries about the “social impact” of a possible collapse that could cascade through the country’s financial system.

Evergrande, whose debt has swelled to 1.95 trillion yuan ($301 billion), more than the gross domestic product (GDP) of Finland, is also set to accelerate asset sales to raise cash, company sources and analysts said.

Concerns intensified in June when the developer failed to pay some commercial paper on time. Since then, its stock price has nosedived, its bonds have been cut into “junk” territory, and a growing number of suppliers have filed lawsuits to recover overdue payments.

After having refrained from showing signs of bailing out the embattled privately-owned developer, Chinese regulators summoned senior company executives last week and issued a rare warning that it needs to reduce its debt risks and prioritise stability.

It’s becoming increasingly clear now, analysts said, that Beijing needs to safeguard suppliers and their employees, in addition to home buyers, to ensure social stability, and policymakers may prioritise them over creditors.

Banks have been instructed to roll over Evergrande’s maturing loans, two sources with knowledge of the matter said, and many news reports on its woes have been removed from the internet.

Those moves, coupled with the decision that a single court in Guangdong province will centrally handle lawsuits against Evergrande across the country, are the clearest signs yet that authorities are co-ordinating efforts, analysts said.

Guangdong is the company’s home base and the firm has been reported at various times to be in stake sale talks with various local government arms and companies there.

Evergrande did not respond to a request for comment.

According to financial news and data provider REDD, the government of Guangdong province is seeking feedback from Evergrande Group’s major banks about forming a creditor committee for the developer, two sources briefed by bankers said. The government initiated the discussions with the banks last week and has yet to make a decision on such a move, which could pave the wave for a restructuring.

Evergrande has 200,000 of its own staff, but it provides employment to 3.8 million people in the country, including construction workers, according to its website.

“Banks and trusts are relatively safe because they have collateral,” said Oscar Choi, founder and chief investment officer of Oscar and Partners Capital.

“Construction workers are not wealthy people and need money to get food, without money they will stop working…if Evergrande has nothing to sell that will worsen its debt problem,” Choi said

Property sales, which Evergrande targets to raise 750 billion yuan this year, are its main source of cashflow, Choi noted.

On Wednesday Evergrande warned interim net profit would slump as much as 39% from a year ago, as it cut the sales prices of its homes to boost revenue and on higher expenses. It is due to post the full report on Aug. 31.

If not swiftly defused, Evergrande’s liabilities, which account for 2% of China’s GDP, may trigger systemic risks, analysts and economists have warned.

Standing at around one trillion yuan, the money owed to Evergrande’s suppliers had not been widely discussed until recently when many threatened or launched legal action.

Bondholders, on the other hand, said they are prepared for losses as Evergrande’s restructuring is believed to be imminent.

They also questioned how much of Evergrande’s 2.3 trillion yuan of assets could be liquidated quickly, as potential buyers were expected to take advantage of its problems and seek distressed prices.

Evergrande, whose other business interests include a bottling water company and an electric vehicle maker, also has been scrambling to raise funds by offloading property and land holdings in both mainland China and Hong Kong.

After the regulatory rebuke last week, however, three insiders said the developer had even less bargaining power.

“Chairman Hui (Ka Yan) didn’t want to sell at a cheap prices because he thought he’s not desperate, but now he has probably changed his mind,” said one person with knowledge of the sale processes, declining to be named because the talks are private.

Hui did not respond to a request made via the company for comment.

Beijing’s decision to publicly step in to push for a debt resolution at Evergrande comes amid concerns about the collateral damage from its failing financial health.

State media reported earlier this month that construction work was halted on two Evergrande projects in the southwestern city of Kunming – one due to late payments.

Policymakers also are concerned about the impact on home buyers who may have already put money down on apartments or arranged mortgages. The firm has hundreds of thousands of residential units yet to be delivered across China.