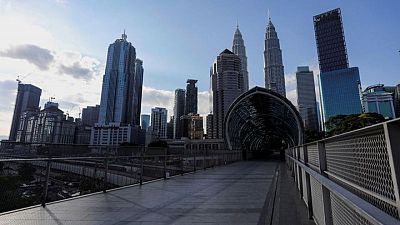 KUALALUMPUR – Global demand for chips from Malaysia is still outstripping supply after a surge in COVID-19 cases disrupted production at a time when car firms and makers of phones and medical equipment are ramping up their output, an industry executive said.

Still, the semiconductor shortage could start to ease by the end of the year as more workers in Malaysia return to factories once they have been vaccinated and the government eases restrictions on critical sectors, Wong Siew Hai, president of the Malaysia Semiconductor Industry Association told Reuters.

“Predicting based on data I’m seeing, the situation should improve, but we still cannot fulfil the demand,” said Wong, adding that demand had not shown signs of slowing and orders had been piling up since the end of last year.

Malaysia is home to suppliers and factories serving semiconductor makers such as Europe’s STMicroelectronics and Infineon, as well as major carmakers including Toyota Motor Corp and Ford Motor Co.

The country accounts for 13% of global chip assembly testing and packaging, and 7% of the world’s semiconductor trade passes through Malaysia, undergoing some added value at local factories or getting combined with other parts before being shipped.

Several automakers and semiconductor companies have said this month that pandemic-related disruptions in the Southeast Asian nation were hitting their supply chains.

Malaysia imposed a strict nationwide lockdown in June that initially shut almost all industries, before it eased restrictions for some key sectors. Plants in recovery areas can now employ 80% of their workforce and run at full capacity if all staff are vaccinated.

“The constraints we had in June and early July are now beginning to reduce and more volume is being shipped because we are allowed to operate at a higher percentage level,” Wong said.

He said it was hard to quantify the lockdown impact on the industry but sales losses easily ran into billions of Malaysian ringgit. One ringgit is worth about a 25 U.S. cents.

Electrical and electronics exports worth $92 billion made up 39.4% of Malaysia’s total exports last year.

Wong said many automakers scaled back chip orders last year, anticipating a downturn in demand, so Malaysian chipmakers diverted capacity to other sections of the electronics industry.

“Come January, the automotive industry realised they wanted to get back the capacity but the semiconductor fabrication plants didn’t have the capacity for them,” he said.