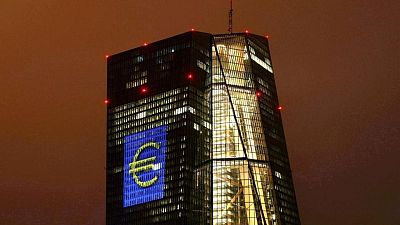 Policymakers appeared especially worried that various formulations under consideration would imply an intentional overshoot of the bank’s 2% inflation target, or force the ECB into an unreasonably long policy commitment that could impair its credibility.

In the end, policymakers agreed on a compromise proposal that essentially promises a longer period of unchanged or lower interest rates, and ties the first hike to an even more pronounced, durable rise in inflation.

“A large majority of members indicated that they could support the revised forward guidance proposal,” the accounts showed. “At the same time, a few members upheld their reservations, as the amended formulation did not sufficiently address their concerns.”

In the end two policymakers, the German and Belgian central bank chiefs, opposed the new wording, which stipulates that rates will not rise until the ECB sees inflation reaching 2% “well ahead” of the end of its projection horizon and price growth staying on target durably.

The definition of durability was among the key concerns and some policymakers wanted the ECB to commit to inflation not falling below the target, a key point of contention for some.

“It was argued that requiring inflation not to fall below the target would effectively amount to intentionally overshooting, which was viewed as inconsistent with the strategy,” the accounts showed.

Opponents also argued that there were no safeguards in place to ensure that an overshoot would be moderate.

Some also argued that getting inflation back to target well before the end of the projection horizon also meant a de facto intentional overshoot.

“Given the significant lags with which monetary policy was transmitted to the real economy, it would amount to intentionally overshooting the inflation target,” the accounts showed.

Others meanwhile argued that the guidance could tie the ECB‘s hands for years and this risked damaging its credibility.

“It was noted that, the further into the future forward guidance extended, the less credible the commitment was likely to be,” the ECB said. “The argument was made that the proposed formulation could prove too ambitious and hence jeopardise credibility by risking a break with the stipulated conditions later on.”

The ECB will next meet on Sept. 9 and will have to decide whether to maintain an elevated volume of bond purchases or allow them to decline given a drop in yields and a weakening of the euro since the last policy meeting.