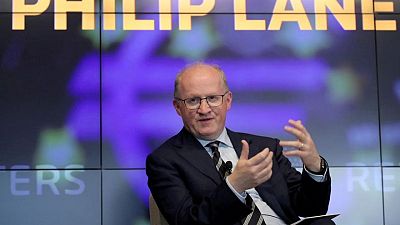 By Balazs Koranyi and Frank Siebelt

FRANKFURT – The fast-spreading Delta variant of COVID-19 is likely to have only a limited impact on the euro zone economy, which remains on course for robust growth this year and next, European Central Bank Chief Economist Philip Lane said on Wednesday.

With Delta spreading around the globe, stocks sold off last week on fears that the more contagious variant could thwart the global recovery from the pandemic and force governments to reintroduce debilitating lockdown measures.

But Lane was more upbeat, arguing that an advanced vaccination campaign and beefed-up public health measures are making Europe the exception while other countries face fresh strains on their health systems from surging infections.

“The fact that (Delta) has not required more extensive measures and that localised measures have been reasonably effective does indicate that, in terms of the overall economy, the impact is quite limited so far,” Lane told Reuters in an interview.

Around two-thirds of euro zone residents have received at least one vaccine shot already and most of the currency bloc’s 19 countries are maintaining an array of public health measures, including mask mandates and social distancing rules.

This resilience, along with a better-than-expected second quarter, means growth remains broadly on the path seen in June when the ECB last published economic projections, Lane added.

“I would say we’re broadly not too far away from what we expected in June for the full year,” Lane said. “ It’s a reasonably well-balanced picture.”

But Lane also warned of growing headwinds that are likely to constrain the expansion after a robust second quarter.

“It looks like bottlenecks are going to be more persistent than expected,” he said. “There is also some moderation in the world economy, which is natural. And the Delta variant, although it has a more limited impact than earlier waves, remains a headwind.”

With the economy rebounding quickly, some policymakers have made the case for a discussion about how the ECB might end its 1.85 trillion euro Pandemic Emergency Purchase Programme.

Lane dismissed those calls, however, saying that with the stimulus scheme set to run until the end of March at the earliest, it was too early to start that discussion now.

Even if it ends then, inflation is set to remain below the ECB‘s 2% target, so the bank will have to maintain some asset purchases via another scheme. That means markets won’t need much notice, Lane said.

“Regardless of when PEPP might end, that’s not the end of the ECB‘s role in terms of QE. This is why we don’t need a huge lead time to think about it,” Lane said.

“We already know what we’re doing until March, which is maintaining favourable financing conditions, so we have time this autumn to work out what comes next,” he added.

Instead, the main task for the ECB at its Sept. 9 meeting will be to decide the pace of bond purchases during the coming quarter.

Lane would not be drawn on that decision but said any move would be incremental as policymakers have already agreed to provide “favourable financing conditions” through March, signalling purchases will remain high in historical terms.

He said relatively high inflation readings over the past several months have not changed his view that the surge in prices is temporary, as wage growth, a precondition for inflation, remains muted.