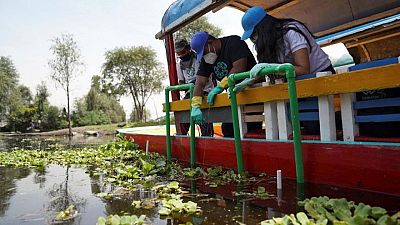 Officials in Mexico City have been focused on cleaning up the long-polluted waters of Xochimilco, a UNESCO World Heritage Site and one of the few areas of the capital that still boasts canal networks dating back to Aztec times.

A team of researchers from the Center for Research and Advanced Studies (Cinvestav) has developed a method using solar energy to activate a pump that sends cleansing “nanobubbles” into the water.

The bubbles help oxygenate the water, eliminating harmful pollutants and reducing greenhouse gas emissions, which leads to healthier flora and fauna, according to Refugio Rodriguez Vazquez, a Cinvestav researcher.

“We’ve seen in the places that we have bubbled a good proliferation of the Montezuma frog,” Rodriguez said, referring to one of Mexico’s native amphibian species.

Xochimilco is known for “chinampas,” floating beds of farm produce cultivated by the Aztecs in the 14th century to feed the population of the pre-Hispanic city.

The nanobubble system enables local farmers “to be able to work on their chinampas and make them productive by having a cleaner environment and conditions,” Rodriguez said.

The Cinvestav team said the nanobubble system was also being applied in two water treatment plants.

It could also potentially be replicated in other waterways in Mexico City, where water quality is considered poor and supplies are often at the mercy of droughts.

The solar panels powering the nanobubble technology sit atop Xochimilco’s famous “trajineras,” barge-like boats that shuttle tourists through the canals. They also provide onboard electricity.

“It can give us more benefits, both national and international tourism,” said Miguel Poblano Lugo, a trajinera service provider. “People who bring their cell phone and don’t have a battery can recharge them right there.”