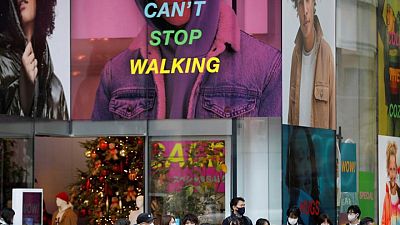 TOKYO – Almost 68% of small and medium-sized Japanese companies posted lower sales in July than in the same month of pre-pandemic 2019, according to a survey by credit research firm Tokyo Shoko Research released Tuesday.

At the same time, 57% said they no longer needed emergency injections of cash.

The two readings highlight how hard a sector that employs about 70% of Japan’s contracted workforce excluding farming and fishing is finding it to thrive after, rather than survive during, the pandemic, and by extension COVID-19’s lasting impact on the world’s third-largest economy.

Japan’s government has pumped trillions of yen into the private sector since the start of the pandemic, with small and medium-sized businesses the biggest beneficiaries.

That package helped cut corporate bankruptcies by 7.2% in 2020 to 7,773, a three-decade low, according to a Tokyo Shoko Research survey released in January.

However, in a currently uneven recovery in which face-to-face service sectors are lagging significantly behind manufacturers, more companies are seeking help with turnarounds toward a post-pandemic economy, said Tokyo Shoko’s research division director Mitsuhiro Harada.

In Tuesday’s survey, covering 10,385 companies and conducted between Aug. 2 and 11, 5.6% said they would consider total revamps of their businesses, including liquidation of debts with or without a court supervision – plans that often require debt-minimizing efforts.

“The government’s initial relief scheme (for small and medium-sized businesses) was about injection… after injection of money,” Harada said.

“But ironically, swollen debts could prevent some companies from taking part in the next-step programs”, including ones that support private investments for post-pandemic growth with public funding, he said.

So while bankruptcies might may not skyrocket, but excess debts carried by companies may continue to increase. “How to handle them has broader implications on Japan’s GDP and growth,” Harada said.