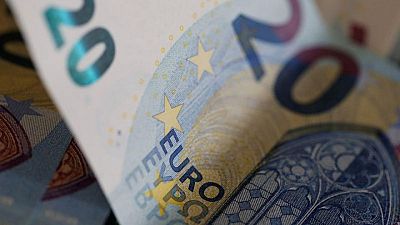 LONDON – Euro zone bond yields rose on Monday as world stocks rebounded from last week’s sell off and a closely watched gauge of business activity suggested that the bloc’s economy is holding up well and price pressures are rising.

The survey also showed that supply chain disruption continued to push up firms’ costs – a development that could mean a pick up in inflation, widely viewed as transitory by major central banks including the ECB – could last longer than anticipated.

If that was the case, policymakers might need to respond by scaling back monetary stimulus, which could drive up sovereign bond yields.

Germany’s 10-year Bund yield rose more than 3 basis points after the PMI data, touching a one-week high at -0.457% in its biggest one day rise in just over two weeks.

It was up six bps from six-month lows hit earlier this month.

Other 10-year bond yields in the single currency bloc also rise with Italian 10-year yields rising over 5 bps to a three-week high at 0.601%.

“In general we have a better mood in financial markets and so it’s not a surprise to see a bit of a move lower in fixed income markets,” DZ Bank rates strategist Rene Albrecht referring to bond prices, which move down when their yields rise.

“There are also some signs of prices pressure coming through in input prices.”

According to the PMI, 87 percent of industrial companies in August said they had to pay more for their inputs. At the same time, many companies passed on increased production costs to customers.

Mounting concerns that the best of the global economic recovery may already be in the past has bolstered major sovereign bond markets in recent weeks.

“It could well be the resilience of services PMIs this morning in the face of the Delta variant but the bigger story in my opinion is supply constraints/inflation hitting manufacturing sentiment,” said ING senior rates strategist Antoine Bouvet, referring to the selloff in bond markets.

“This is a developing story and one that has put a cap on interest rates in recent weeks.”