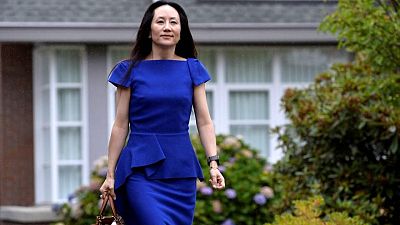 Meng, 49, was detained in December 2018 at Vancouver International Airport on a U.S. warrant charging her with bank fraud for allegedly misleading HSBC Holdings about Huawei’s business dealings in Iran. China detained two Canadians shortly afterward, sentencing one this month to 11 years in prison for espionage, in a move widely seen as retaliation. Beijing has denied any connection between the arrests and Meng’s case.

Here is an explanation of what can happen next in the process.

Normally extradition hearings take place in a single day, but Meng’s hearings have been spread out over several years.

The first thing Holmes had to decide was whether Meng’s case met the double criminality standard, meaning whether her alleged crime would be considered illegal in Canada. Holmes decided in May 2020 that it did, and the case proceeded.

Holmes is now deciding whether the abuses of process alleged by Meng’s defense team are enough to stay the extradition. They have been separated into four “branches”:

1) Former U.S. President Donald Trump’s alleged politicization of the case against Meng, which the defense says has ensured she would not receive a fair trial in the United States;

2) Missteps that occurred during Meng’s initial arrest by Canadian and American authorities;

3) Allegations that the United States misled Canada in the evidence it provided outlining the case against Meng.

Meng’s defense team has argued those should be taken as a pattern of abuse and are enough to stay the extradition. Prosecutors representing the Canadian government have said they are either not enough to halt the extradition or are matters for the U.S. courts.

The bar for extradition is lower than it would be in a trial. As a Canadian judge, Holmes is not qualified to rule on whether the person is guilty or innocent based on another country’s laws, so she only has to decide if the evidence against Meng would allow a trial to proceed in Canada.

If Holmes rules in favor of extradition, the case moves to Canada’s justice minister for final approval.

If she rules for a stay in the extradition, the process likely stops there. It is rare for the Canadian government to appeal a court’s ruling against extradition.

A stay in the extradition would be politically expedient for the Canadian government, which has been thrown into the middle of a fight between the United States and China because of the case. Meng’s release could also spur Beijing to release the two Canadians detained after her arrest.

Canada’s justice minister makes the final decision on whether to surrender the person for extradition.

Meng can appeal both the judge’s decision and ask for a judicial review of the minister’s decision. Such an appeal could take years to work its way through the courts and potentially end up at the Supreme Court of Canada. During that time, she would likely push to have her bail conditions reassessed.

Her bail conditions mean she can leave her residence under supervision but must stay home at night.