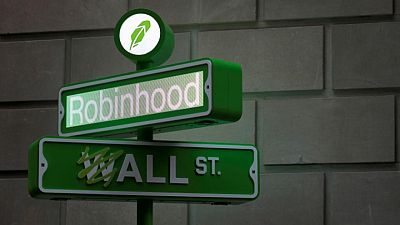 By Sruthi Shankar and Medha Singh

– Shares of Robinhood Markets Inc fell 9% on Thursday as the fee-free broker’s warning about a slowdown in trading raised concerns about its reliance on a pack of small-time investors to sustain a frenzy in stocks, options and cryptocurrencies.

In its first results as a public company on Wednesday, Robinhood said the crypto trading mania this year helped double its second-quarter revenue, but also warned it expected retail investors who trade on its popular app to take a breather in the third quarter.

“Robinhood is dependent on high volatility and you don’t get high levels of volatility all the time,” said David Madden, market analyst at Equiti Capital.

“It comes in spurts and it can just be a ghost town for months and months.”

Dogecoin, a meme-inspired cryptocurrency that made up 62% of Robinhood’s total crypto volumes in the second quarter, has catapulted around 9,000% in value in the past year.

Bitcoin, the world’s biggest cryptocurrency, is up 52% this year, but Refinitiv data shows trading volumes have declined in every month since May.

Robinhood’s own stock has been dubbed the “meme of memes” after it rallied like meme stocks GameStop Corp and AMC Entertainment, and is up about 30% since its market debut on July 29.

Still, Chief Financial Officer Jason Warnick said on CNBC Robinhood was not looking to capitalize on the rally by selling new shares.

GameStop and AMC have both raised billions of dollars in new capital amid the frenzy in their shares. (Graphic: Meme of the memes – https://fingfx.thomsonreuters.com/gfx/mkt/akpezzakqvr/Pasted%20image%201629380234685.png)

Social media chatrooms were abuzz with activity as users reacted to the company’s warning.

“I wouldn’t buy this. (Too) many red flags. If you made money, good, but this will never go to $80 again,” a Stocktwits user wrote on the trading-focused social media site, tagging Robinhood’s ticker $HOOD.

Robinhood also said it was considering selling branded merchandise, in a move similar to AMC, which has floated the possibility of selling products from theaters.