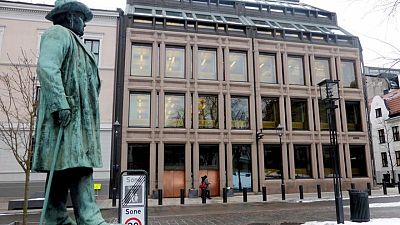 ARENDAL, Norway -Norway’s $1.4 trillion sovereign wealth fund, the world’s largest, posted a 9.4% return on investment for the first half of the year on Wednesday but warned that signs of inflation seen worldwide could lead to unprecedented losses.

The fund’s handsome return was driven by a sharp rise in global equities, particularly energy, finance and tech stocks, earning it 990 billion crowns ($111 billion) in the January-June period.

That was 0.28 percentage point higher than the fund’s benchmark index – and equivalent to a little over $20,000 for every Norwegian man, woman and child.

But the fund, which holds stakes in over 9,100 companies worldwide, is concerned that signs of inflation observed in things such as wages, freight rates or raw materials, will lead to much higher interest rates worldwide.

“High interest rates will generally hit the fund’s portfolio in two different ways: both the bond market and the equity markets at the same time,” Chief Executive Nicolai Tangen told Reuters after he presented the fund’s results.

In past situations, he said, a decline in the fund’s bond portfolio would usually be helped by a better performance in the stock part of portfolio, and vice-versa, but this time could be different if both are hit at the same time.

“You could see declines (in the value of the overall portfolio) that we have never seen before,” Tangen said, declining to give specific numbers.

The fund’s worst ever quarterly performance https://www.reuters.com/article/us-norway-swf-idUSKCN25E0Q4 was in January-March 2020, when the pandemic began, and the fund lost $153 billion.

Some 72.4% of the fund’s investments were in stocks at the end of June, 25.1% in bonds, 2.4% in unlisted real estate and 0.1% in a recently created portfolio of unlisted renewables.

The fund could shorten the duration of some of its bond holdings or reduce the portion of equities in the overall portfolio, Tangen said, declining to say whether the fund was taking these steps or considering taking them.

Overall though, there was little margin for action, he said.

“For a long-term investor, it is limited what we can do,” he told a news conference earlier.