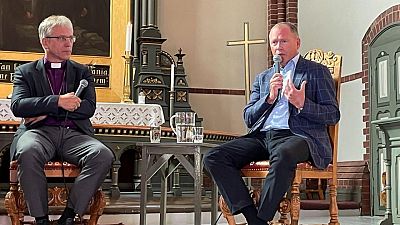 ARENDAL, Norway – Nicolai Tangen broke new ground as the head of Norway’s $1.3 trillion sovereign wealth fund on Tuesday by preaching on the virtues of sustainable capitalism in a church.

“Capitalism is undergoing an incredible transformation, at the fastest pace I have seen in my life,” Tangen told around 170 people gathered at the 19th century neo-Gothic Trinity Church in Arendal, southern Norway.

“Shareholders have more influence than ever before on how to run companies, annual general meetings see many more debates especially on executive pay, and climate change is discussed with more and more companies,” said the former hedge fund manager, who became the fund’s CEO a year ago.

The fund pools the state’s oil revenues and invests them abroad. It has an ethical mandate and does not invest in firms deemed unethical, such as tobacco producers.

The Church of Norway, which is Lutheran and the majority religion in the country, had invited Tangen to discuss the purpose of the fund at home and abroad.

“Capitalism has survived wars, crises and ideologies such as communism. It will survive but it will have a different face,” Tangen said, the first time a Norwegian wealth fund CEO has spoken publicly in a place of worship.

Since Tangen took the helm, the fund has pushed for more women to be named to the boards of the companies it invests in and has said it would now be more willing to drop companies that are not deemed ethical or sustainable.

“The fund must help build a more sustainable and more just society, not just for Norway, but for the whole world,” Olav Fykse Tveit, the presiding bishop of the Bishops’ Conference of the Church of Norway, told Reuters.

Still, Tangen said, the fund would stick to its main purpose: “The number one priority is to make money.”