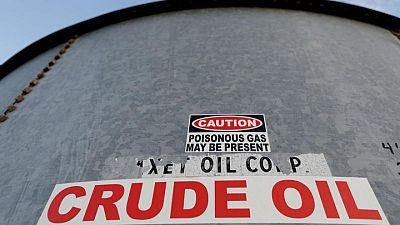 NEWYORK -Oil prices weakened for a fourth session on Tuesday on the back of surging cases of coronavirus in Japan, a weak demand picture in Asia and a belief in OPEC and among its allies that the market does not need more crude.

“A move below here would be a significant technical breakout and surely reflect serious concerns about growth in the coming months as Delta (coronavirus variant) causes increasing restrictions around the world.”

Japan, the world’s third-largest economy, extended its state of emergency in Tokyo and other regions on Tuesday and announced new measures covering seven more prefectures to counter a spike in COVID-19 infections that is threatening the medical system.

Hedge funds and money managers cut net long positions in U.S. crude to the lowest since November in the week to Aug. 10 as resurgent coronavirus infections in several countries dampened hope for of a rapid resumption in long-distance air travel.

“The oil market will likely require a distinct downtrend in the virus that will allow China to reopen its economy,” said Jim Ritterbusch, president of Ritterbusch and Associates in Galena, Illinois. This would permit the energy market to establish support and stem the number of bullish positions being unwound.

Daily crude processing in China, the world’s biggest oil importer, fell to its lowest in July since May 2020 as independent plants slashed production amid tighter quotas, high inventories and weakening profits, data showed on Monday.

On the supply side, U.S. shale oil output is expected to rise to 8.1 million barrels per day (bpd) in September, the highest since April 2020, according government data on Monday.

Nine analysts polled by Reuters estimated, on average, that crude stocks slipped by about 1.1 million barrels in the week to Aug. 13.

Last week, U.S. President Joe Biden’s administration urged OPEC+, which groups members of the Organization of the Petroleum Exporting Countries and other producers such as Russia, to boost oil output to tackle rising gasoline prices.

But four sources told Reuters on Monday that the group believes oil markets do not need more crude than they plan to release in the coming months.