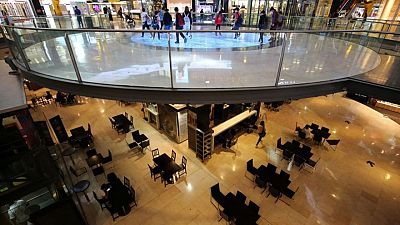 BRUSSELS -The euro zone economy grew 2% in the second quarter, the European Union statistics office said on Tuesday, confirming its earlier reading as the easing of coronavirus restrictions spurred economic activity after a brief recession.

In a separate release Eurostat also said that employment in the 19-nation bloc grew 0.5% in the April-June period compared to the previous quarter, in line with forecasts of economists polled by Reuters.

The healthy 2% increase in gross domestic product (GDP) compared to the previous quarter was paired with a 13.6% rise from the same period last year, when the euro zone economy suffered the worst phase of the pandemic.

The annual GDP reading was slightly revised downward from Eurostat’s earlier estimate of 13.7% growth, released at the end of July.

The quarter-on-quarter growth followed two quarters of GDP decline with the euro zone economy shrinking by 0.6% in the last quarter of 2020 and by 0.3% in January-March.

The GDP growth fuelled a rise in employment in April-June, with the indicator increasing 0.5% on the quarter and 1.8% on the year. The annual growth was above forecasts of a 1.5% rebound after a series of falls.

Strong growth is expected to continue in the third quarter, said Jessica Hinds of research firm Capital Economics, forecasting a limited fallout on the euro zone economy from the spread of the more contagious Delta variant of the new coronavirus.

Despite the robust rebound in the second quarter, the euro zone economy remains some 3% smaller than it was at the end of 2019, unlike the U.S. and Chinese economies, which have pulled above their pre-pandemic peaks.

Among the euro zone’s largest economies, Spain and Italy posted the largest GDP rises, growing respectively by 2.8% and 2.7% on the quarter, Eurostat data showed, confirming its previous reading.

Italy, which was among the euro zone’s worst hit countries last year, grew also in the first quarter of 2021, when the bloc’s GDP fell.

Germany and France recorded more moderate GDP increases, respectively of 1.5% and 0.9% on the quarter.

A third final release of GDP figures for the second quarter will be issued by Eurostat on Sept 7. That reading will include a breakdown by economic sectors.

Available data from euro zone countries show that household spending was a major driver of growth in the second quarter, with figures released on Tuesday by the Netherlands indicating a nearly 6% jump in consumer spending there as bars and restaurants were allowed to gradually reopen from March after a six-month lockdown.

Trade is also contributing to the economic expansion. In June euro zone exports of goods outside the bloc rose by more than 20% on the year to nearly 210 billion euros ($247 billion), Eurostat said last week.

Industry output has instead fallen both in June and May on the month, more than offseting a production rise in April, Eurostat data showed.