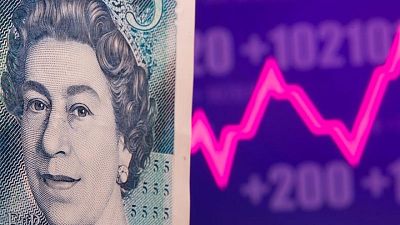 LONDON -The British pound held steady against the dollar and edged higher against the euro on Monday with risk appetite in global markets weak after economic data from the United States and China stirred concern about their recovery from COVID-19.

The dollar edged higher and riskier currencies generally lost out – with the Australian dollar leading the losses. [nL1N2PM0RX]

Against the safe-haven Japanese dollar, the pound was down 0.4%, having touched its lowest in nearly two weeks.

As well as being driven by shifts in global risk appetite, a busy week for domestic data is also expected to affect the pound. Focus is on the UK labour market report on Tuesday, inflation data for July on Wednesday and retail sales data on Friday.

Earlier in August the Bank of England set out plans for how it would start to wind down its massive bond-buying programme.

Since then the pound has generally slipped versus the dollar but strengthened slightly versus the euro, as the European Central Bank is not expected to tighten policy as soon as the BoE.

“The recent hawkish tilt by the Bank of England has given the pound an added buoyancy recently, and some decent numbers this week could act as a tailwind for GBP bulls, after recent weakness,” Michael Hewson, chief market analyst at CMC Markets, said in a note to clients.

ING strategists wrote in a client note that investors will be looking for how the data this week compares to the BoE’s upbeat growth outlook for the UK.

“EUR/GBP may well find fresh bearish pressure if UK data remain supportive for the pound, and move back below 0.8500,” ING said.

Speculators’ position on the pound turned net long in the week to Aug. 10, according to weekly CFTC positioning data. This means that the speculative market generally expects the pound to strengthen.