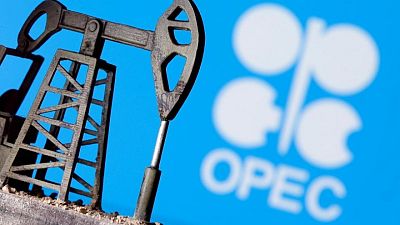 LONDON -OPEC on Thursday stuck to its prediction of a strong recovery in world oil demand in 2021 and further growth next year, despite concerns about the spread of the Delta coronavirus variant that has weighed on prices.

The Organization of the Petroleum Exporting Countries in a monthly report also raised its forecast of supply from rivals, including U.S. shale producers, next year, a potential headwind for the efforts of the group and allies to balance the market.

“The global economy continues to recover,” OPEC said in the report. “However, numerous challenges remain that could easily dampen this momentum. In particular, COVID-19-related developments will need close monitoring.”

OPEC‘s view that demand will shrug off the latest pandemic-related setback contrasts with that of the International Energy Agency, which trimmed its outlook on Thursday. The U.S. government’s forecaster also kept its 2021 growth forecast steady, but trimmed that for 2022.

Oil demand will rise by 5.95 million barrels per day (bpd) this year, or 6.6%, unchanged from last month’s forecast, OPEC said in the report. In 2022, fuel use will expand by 3.28 million bpd, OPEC said, also unchanged.

Oil was trading above $71 a barrel after the report was released. Prices have risen to pre-pandemic highs above $77 this year, boosted by economic recovery hopes and OPEC+ supply cuts, although concern about the Delta variant has weighed.

OPEC raised its forecast of 2021 world economic growth to 5.6% from 5.5% assuming the impact of the pandemic will be contained, although it warned of “significant uncertainties”. The outlook for 2022 was raised by the same increment to 4.2%.

“The path of the COVID-19 pandemic will be the overarching factor impacting the near-term pace of the recovery, with the potential emergence of new COVID-19 variants and/or mutations posing a particular risk,” OPEC said.

The report showed higher output from OPEC and forecast more supplies from rivals in 2022, including U.S. shale producers.

OPEC and its allies, known as OPEC+, are gradually unwinding record oil output cuts put in place last year when the pandemic hit demand. In July, they agreed to gradually boost output by 400,000 bpd a month from August.

The report showed OPEC output rose in July by 640,000 bpd to 26.66 million bpd, as Saudi Arabia unwound the rest of a voluntary supply cut it had made to support the market.

The report forecast a 2.9 million bpd rise in supply from OPEC‘s rivals in 2022, 840,000 bpd more than seen last month, partly because of the decision by OPEC+ to pump more and as higher prices spur investment.

“In the U.S., operators have remained highly disciplined in 2020-2021,” OPEC said. “Nevertheless, rig count continue to rise, more wells are being fracked and more frac crews are deployed, as firms are again flush with free cash flow.”

The extra barrels will limit growth in demand for OPEC crude next year. OPEC sees the world needing 27.6 million bpd from its members, down 1.1 million bpd from last month but still in theory allowing for higher OPEC production.