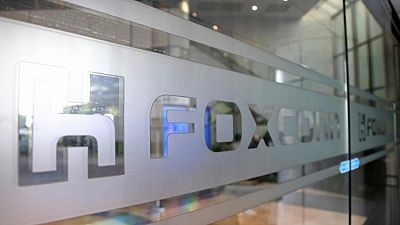 TAIPEI – Taiwan’s Foxconn reported a better-than expected quarterly profit on Thursday due to strong demand for technology products from clients, such as Apple Inc, as people continued to telecommute amid the COVID-19 pandemic.

The world’s largest contract electronics maker reported April-June net profit of T$29.779 billion ($1.07 billion), up 30% from a year earlier. That compared to a Refinitiv consensus estimate of T$25.98 billion drawn from 12 analysts.

Its revenue rose 20% from a year earlier to T$1.35 trillion, its highest on record for the second quarter and better than a company forecast for a 15% rise. Foxconn also forecast a year-on-year rise in revenues for the current quarter.

Business was “mainly driven by strong smartphone demand”, CFO David Huang said on a conference call, adding that both net profit and revenue hit record highs in the first half.

Chairman Liu Young-way, however, cautioned: “The pandemic situation could get worse in Asia … we need to wait and see whether that could affect the supply chain.”

He reiterated that the global chip shortage could extend into the second quarter of 2022, but that it would have a “very small” impact on Foxconn as many of its clients were “first-tier” companies with more leverage on supplies.

Apple said in July that the chip shortage that hurt its ability to sell Macs and iPads will start to affect iPhone production and forecast slowing revenue growth.

The Taiwanese company has been seeking to acquire chip plants globally as the shortage rattles producers of goods from cars to electronics.

Foxconn, formally called Hon Hai Precision Industry Co Ltd, expects overall revenue to rise 3-15% in the third quarter and revenue from the consumer electronics division to rise more than 15% from a year earlier.

Foxconn’s shares have risen about 16% this year. They ended flat on Thursday, in line with the broader market.