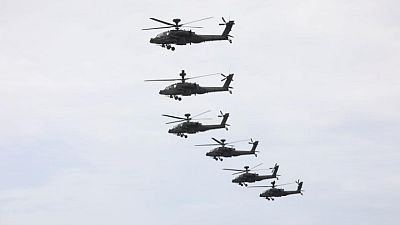 – A U.S. bidding battle could be brewing for UK aerospace engineer Meggitt, which has been approached by TransDigm over a possible 7.03 billion pound ($9.74 billion) offer, days after accepting a lower bid from Parker-Hannifin.

Meggitt, a supplier of aerospace components including wheels and brakes for military fighters, announced TransDigm’s overture on Wednesday, saying the possible offer of 900 pence per share from the U.S. player was preliminary and non-binding.

Nonetheless, that topped an 800 pence per share proposal from Parker last week. Meggitt said it continued to back Parker’s 6.3 billion pound proposal, but said it would also review TransDigm’s potential offer.

News of the approach from Ohio-based TransDigm, which makes aircraft components and systems used in commercial and military aircraft, sent shares of London-listed Meggitt to a fresh record high of 846 pence before closing at 830 pence.

Meggitt shares, which lost nearly 30% in value last year, have gained 77% since the Parker deal was announced last week.

“Meggitt believes Parker’s offer continues to represent an attractive proposition for Meggitt’s shareholders and for its broader stakeholders,” said the company, based in Coventry, central England.

TransDigm’s plans for Meggitt and the potential impact on the company’s employees, pension schemes and customers along with the British government and other regulatory bodies would be considered carefully, the British firm added.

Meggitt employs over 9,000 people in 14 countries across the defence, aerospace and energy sectors.

Parker, which is also based in Ohio, and operates in industrial and aerospace markets, has made a series of commitments to the British government on jobs and security.

Analysts have said that it was unlikely that the government would block Meggitt’s deal with Parker, given the suitor’s proposed safeguards.

U.S.-listed shares of Parker were down 1.2%, while TransDigm was marginally up by 1627 GMT.

The Ultra proposal has attracted the attention https://www.reuters.com/article/britain-ma-cobham-idUSL1N2P21N4 of the British government.

Takeovers for British companies hit a 14-year high by value in the first seven months of 2021, driven by relatively cheap valuations due in part to the pandemic and Brexit.