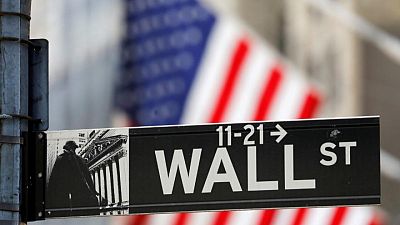 The data showed tentative signs inflation had peaked as supply-chain disruptions work their way through the U.S. economy.

“This is a more moderate reading than expected, especially on the core,” said Gennadiy Goldberg, an interest rate strategist at TD Securities in New York.

Speculation is growing that Fed Chair Jerome Powell will signal timings on tapering stimulus at a meeting of central bankers in Jackson Hole, Wyoming, on Aug. 26-28.

“Instead, we can all breathe a little easier, albeit safe in the knowledge that tapering is still coming and it’s likely to be announced next month,” he said.

U.S. nonfarm payrolls figures due in September could also influence tapering if they are particularly strong.

The MSCI all-country index, a gauge of stocks across the globe, hit a record high and was last trading up 0.29%.

The Dow Jones Industrial Average and S&P500 both closed at record highs, with sentiment boosted by U.S. lawmakers approving a trillion-dollar infrastructure package on Tuesday.

Oil gained on Wednesday, changing course after the Biden administration said it would not call on U.S. producers to increase crude output, and that efforts to increase OPEC production were a longer-range plan.

Asian shares had slipped as fears about further waves of the coronavirus dampened a positive lead from Tuesday’s record close on Wall Street.

The Delta variant of the new coronavirus is spreading quickly in many Asian countries, raising fears about local restrictions on travel and other activity damaging the economic recovery.