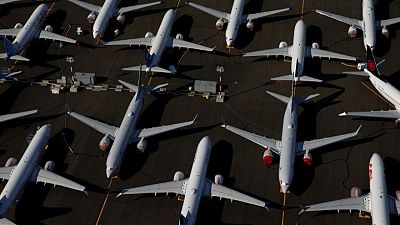 SEATTLE – Boeing Co said on Tuesday it handed over 28 airplanes to buyers in July as revived domestic travel fuels 737 MAX deliveries, but the U.S. planemaker’s 787 remained in inventory for a fourth month due to defects.

The closely watched monthly orders and deliveries snapshot comes as Boeing bids to recoup billions of dollars in lost sales from the coronavirus pandemic, and move beyond the safety scandal caused by two fatal 737 MAX crashes.

Of the aircraft Boeing delivered to airlines and other buyers in July, 22 were 737 MAX single-aisle jets, one was a P-8 maritime patrol aircraft for the U.S. Navy, and the remaining five were widebodies. The widebodies included one KC-46 tanker to the U.S. Air Force and four freighters.

As well as aiming to raise 737 MAX deliveries, Boeing is also dealing with structural defects of its bigger, more profitable 787 planes, deliveries of which have been halted twice since 2020. Boeing has been forced to cut production, though it has on occasion handed over the jet to buyers.

The Federal Aviation Administration (FAA) confirmed on July 12 that some undelivered Boeing 787s have a new manufacturing quality issue the planemaker will need fix before the planes will be delivered. A source told Reuters that it may be at least several more weeks before the issue is resolved.

Deliveries are financially important to planemakers because airlines pay most of the purchase price when they actually receive the aircraft.

Boeing is eying a strong recovery in domestic travel in the United States and other markets, though international passenger travel remains depressed.

It has delivered 154 737 MAX jets since that aircraft returned to service in November 2020 following a nearly two-year safety ban after the fatal crashes.

Overall, Boeing delivered 184 jetliners for the year through July, according to the latest data made available by the planemaker.

Boeing said it received orders in July for 31 aircraft, including 19 of its 737 MAX jets, and 12 of its larger widebodies.

However, airlines in July cancelled orders for 17 jets, including 15 MAXs and two 787s. For the first half of the year, Boeing also removed 11 of its 787s from its backlog after applying stricter accounting standards to previously booked orders.

Factoring in cancelled orders, instances where a buyer converted to another jet model and accounting adjustments, Boeing’s order tally for July stood at 14 – the sixth straight month of positive net orders for Boeing.