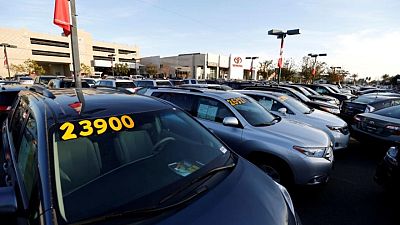 – Early this year, Brian Benstock, a Honda and Acura dealer in New York City, convinced his banker it would be smart to buy more vehicles than he could fit onto his parking lot.

The bet has paid off. Popular SUV models are getting snatched up by customers as soon as they reach his dealership. Automakers cannot build new ones fast enough because of semiconductor shortages https://www.reuters.com/article/chips-shortage-explainer-int/explainer-why-is-there-a-global-chip-shortage-and-why-should-you-care-idUSKBN2BN30J. Like his peers, Benstock is in the happy position of applying additional charges to sticker prices.

“Dealers really don’t have a choice with supplies so low. Without the additional markups, they might find it difficult to keep the doors open,” he said.

What started as a short-term disruption in shipments of automotive semiconductors is becoming a long-term problem that is driving average prices of new and used vehicles to luxury-car levels, fueling inflation fears and causing concern in the White House.

The Labor Department will release its July consumer price index – a tool for measuring how the economy as a whole is performing when it comes to inflation or deflation – on Wednesday.

Automobiles have become increasingly dependent on chips for everything from engine management to driver-assistance features such as emergency braking. The shortage stems from a confluence of factors as carmakers compete against the sprawling consumer electronics industry for chip supplies.

Rising prices for vehicles and other goods are a problem for

the administration of U.S. President Joe Biden. Some Republicans have blamed runaway prices on massive federal spending under Biden, which they want to curtail. A senior White House official told Reuters: “The semiconductor shortage is at the heart of the price spikes we’ve seen in autos.”

The White House has been working to try to help address the shortage. “There is some evidence that at least some of the auto prices may have peaked,” the official said, especially among used cars. But the official added there was still too much uncertainty on when prices might return to normal levels.

While high vehicle prices cause anxiety in Washington, they are fueling record profits for U.S. auto dealers. Auto manufacturers are enjoying pricing power they have not experienced in decades.

U.S. aggregate dealer profits from new vehicles in July are projected to reach an all-time high of $5.1 billion, with average profit per vehicle estimated to top $4,200, according to JD Power.

The chip shortage forced dealers and automakers to operate with far leaner inventories than usual – an approach industry executives have long dreamed about, but rarely executed, with the exception of Tesla Inc. Now, U.S. auto industry executives are working on how to keep inventories tighter, and prices higher, even after the supply chain crunch eases.

“We are really committed to going to an order-based system and keeping inventories at 50 to 60 days’ supply,” Ford Motor Co’s chief executive, Jim Farley, told analysts in late July. “I know we are wasting money on incentives.”

General Motors Co, which delivered a record pretax profit in the second quarter, expects high prices to continue into 2022.

Going forward, “we will be much leaner and efficient,” GM CEO Mary Barra told investors.

Dealers have heard such talk before. The chief executive of auto retailer Lithia Motors Inc said moving to a build-to-order model would be beneficial, but added he was doubtful that would occur.

“I find it difficult to believe that competitive manufacturers are going to build the correct number of cars,” CEO Bryan DeBoer told analysts recently. “They have always traditionally overproduced.”

Stellantis NV Chief Executive Carlos Tavares said he is concerned about inflation pressures, even as the No. 4 global automaker benefited from strong pricing for its Jeep, Ram and other brands in the United States.

In the meantime, consumers with used vehicles to sell are getting a boost as dealers use social media and calls to former customers to replenish their supply of used vehicles.

“We’re telling customers … ‘You bought your car from us two years ago, here’s all your money back,’” Joel Bassam, the president of Baltimore-based Easterns Automotive Group, said during a recent discussion organized by dealership sales platform Roadster.

“Over the last several quarters we’ve actually bought more cars from our customers than we’ve sold them,” Garcia said. “But we don’t have the capacity today to certify as many of the cars as we could buy and we have more demand than we can handle as well.”