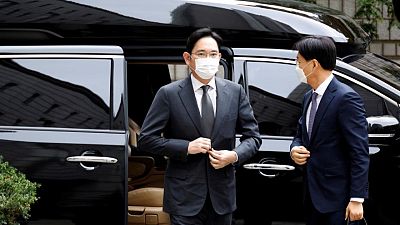 The following is a timeline of Lee’s legal woes.

Dec. 21: A team led by a special prosecutor launches a formal criminal investigation.

Feb. 17: Lee is arrested, accused of paying bribes to organisations controlled by Choi to secure support for a merger of two Samsung affiliates that was widely seen as designed to cement his control of the Samsung conglomerate.

Feb. 28: Samsung Group dismantles its corporate strategy office amid accusations that Lee worked with the office to bribe Park via Choi.

Feb. 5: Lee is released from jail after an appeals court cut his sentence to two and a half years and suspended the sentence for four years. Lee’s attorney says he will appeal to the Supreme Court to try to overturn the conviction.

Aug. 29: South Korea’s Supreme Court sends Lee’s case back to the appellate Seoul High Court for review, saying its interpretation of what constituted bribes was too narrow.

May 6: Lee makes a public apology over controversies in succession plans at Samsung and says he will not hand over management rights to his children.

Sept. 1: Prosecutors indict Lee and 10 others, accusing them of accounting fraud and stock price manipulation in connection with a 2015 $8 billion merger of two Samsung affiliates.

Jan. 18: The Seoul High Court sentences Lee to two and a half years and he returns to prison.

March 19: Lee receives emergency surgery for a burst appendix and is hospitalised until April 15 when he returns to prison.

March 26: A South Korean independent panel recommends prosecutors stop probing Lee over an allegation of unlawful use of a sedative.

April 22: Trial in which he is accused of accounting fraud and stock price manipulation begins.

June 4: Prosecutors seek a 50 million won ($43,670) fine for Lee over the alleged unlawful use of the sedative.

June 29: A court orders Lee stand trial for the sedative use.

Aug. 9: Parole for Lee is approved.

Aug. 19: Trial over his sedative use is scheduled to begin.