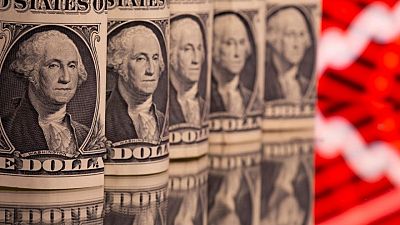 NEWYORK – The U.S. dollar edged up on Monday to touch the highest in more than two weeks against a basket of currencies, buoyed by upbeat U.S. data, even as traders kept a close watch on the spread of COVID-19 cases in the United States.

Data Monday showed U.S. job openings jumped to a record high in June and hiring increased. That came on the heels of Friday’s U.S. monthly jobs report that showed U.S. employers hired the most workers in nearly a year in July and continued to raise wages.

The dollar rose sharply following Friday’s report, with the upbeat jobs news helping to support the view that the Federal Reserve may act more quickly to tighten U.S. monetary policy. Fed officials have made a jobs market recovery a condition of tighter monetary policy.

“The market is struggling to balance signs of a stronger jobs market with rising Delta concerns,” said Adam Button, chief currency analyst at ForexLive in Toronto.

“I would say the market is holding its breath on Delta and how quickly it resolves,” he said. “It’s led to a standstill in the forex market.”

Meanwhile, the dollar is up 0.6% versus the Swiss franc after rising 0.95% on Friday.

The Japanese yen was little changed versus the greenback at 110.28 per dollar.

Sharply lower oil prices weighed on the commodity-linked currencies, including the Australian dollar, which eased 0.3% to US$0.7334. The Canadian dollar fell 0.20% versus the greenback at 1.26 per dollar.

Speculators cut their net long dollar positions in the latest week, data showed on Friday, but they are still positioned for the greenback to rise.