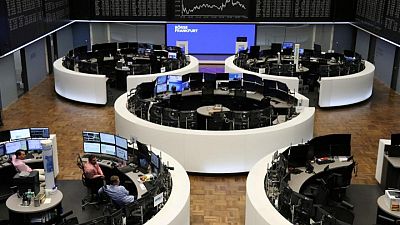 The pan-European STOXX 600 index rose 0.2% to a closing high of 470.68 points, powered by rises in the defensive sectors of utilities and healthcare.

Technology stocks rose 0.5%, led by a 4.5% jump in British food delivery company Deliveroo after Germany’s Delivery Hero took a 5.09% stake in it.

“Oil remains under pressure, but while there might well be some Delta variant fears driving the move, the fact that equities have remained broadly calm points towards an odd disconnect,” said Chris Beauchamp, chief market analyst at IG.

“Either equities are blithely ignoring a major worry, or oil prices are undergoing a self-contained selloff that is being driven chiefly by supply concerns.”

The STOXX 600 capped its best week since mid-March on Friday, on the back of a flurry of dealmaking and strong earnings. Volumes are expected to thin as many traders head for summer holidays.

Of the 70% of the STOXX 600 companies that have reported so far, 68% have topped analysts’ profit estimates, Refinitiv IBES data shows. Only 51% beat expectations in a typical quarter.

Investors will be keenly watching U.S. inflation data this week to see if the numbers make a case for an early tapering announcement by the Federal Reserve, the odds of which were cemented after a strong jobs report on Friday.

Among decliners, Hargreaves Lansdown fell 11.3% even after posting higher annual underlying earnings as Britain’s biggest fund supermarket said it did not expect equity trading volumes to remain at high levels.