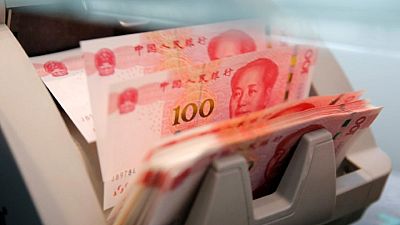 BEIJING – China’s new yuan loans are expected to fall back in July after record lending in the first six months, a Reuters poll showed, but are still likely to be higher than a year earlier, as the central bank seeks to underpin the country’s economic recovery.

Chinese banks are estimated to have issued 1.20 trillion yuan ($185.29 billion) in net new yuan loans last month, down from 2.12 trillion yuan in June, according to the median estimate in the survey of 29 economists.

That would be higher than 992.7 billion yuan issued the same month a year earlier.

Chinese banks doled out a record 12.76 trillion yuan in new loans in the first half of 2021, even as the People’s Bank of China (PBOC) sought to cool broad credit growth to rein in debt risks.

China is poised to quicken spending on infrastructure projects while the central bank supports with modest easing steps, as risks from the Delta variant and floods threaten to slow its recovery, policy insiders and analysts said.

Last month, a meeting of the Politburo, a top-decision making body of the ruling Communist Party, pledged to maintain an accommodative stance in the face of an uneven domestic recovery and global uncertainty.

Annual outstanding yuan loans were expected to grow by 12.3% for July, the same as in June, the poll showed. Broad M2 money supply growth in July was seen at 8.7%, up from 8.6% the previous month.

Any acceleration in government bond issuance could help boost total social financing (TSF), a broad measure of credit and liquidity. TSF growth slowed to 11% in June from a near three-year high of 13.7% in October 2020.