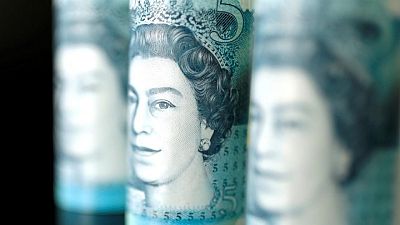 London -The pound weakened against the dollar on Monday, though was close to its strongest versus the euro since February 2020, as investors focused on the potential pace of stimulus tapering after the Bank of England meeting and strong U.S. jobs data.

In recent weeks, sterling has outperformed as COVID-19 cases have fallen and high vaccination rates allowed the British government to lift most social-distancing rules.

The pound strengthened versus the euro for the last three weeks in a row, and on Friday reached 84.7 pence per euro, its strongest since February 2020.

But on Monday, the unit opened slightly lower versus the dollar, then crept up during the morning session, before falling as the dollar strengthened later in the day.

Currency markets were digesting a strong U.S. jobs report, which prompted investors to bring forward their bets on the Federal Reserve tightening its pandemic-era stimulus and sent the dollar to a four-month high against the euro during Asian trading.

The Bank of England said on Thursday “some modest tightening” of monetary policy over its three-year forecast period was likely to be necessary.

“On the one side, we’re seeing the pound showing signs of wanting to outperform because of the shift in BoE policy,” Joel Kruger, a currency strategist at LMAX Exchange said.

“At the same time, there is that offsetting theme of the dollar and risk markets and what happens with the Fed.”

“Ultimately, safe-haven flow offsets demand for the pound on the broader themes.”

Goldman Sachs FX strategists wrote in a client note that they are upgrading their three- and six-month euro-sterling forecasts to 0.85.

“We expect the currency to be particularly sensitive to incoming data on inflation and the labor market as the furlough scheme expires,” they said.

Speculators cut their net short position on the pound in the week to Aug. 3, according to weekly CFTC positioning data, leaving the market’s overall speculative position close to neutral.

“Hawkish speeches from two MPC members in the middle of July translated into a more hawkish slant from the BoE policy meeting in early August,” Rabobank FX strategists wrote in a client note.

“This is likely to provide further support for net GBP positions in the next set of data.”

The UK’s preliminary GDP reading for the second quarter of the year is due on Thursday.