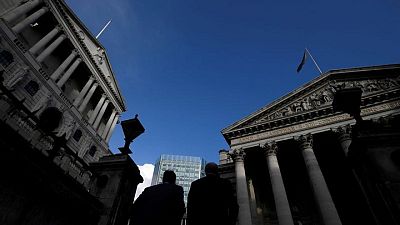 Two-year gilt yields rose as high as 0.162%, close to levels last seen during a period of market turmoil at the start of the COVID-19 pandemic which prompted the BoE to restart its bond purchase programme.

On Thursday, the BoE set out the process by which it will start to reverse some of these purchases – although not before it has raised its main interest rate to 0.5% from the current 0.1%, which markets do not price in before 2023.

The BoE said it expected some modest tightening of monetary policy to be needed over the next 2-3 years, and following which markets have brought forward their expectation for a first rate rise, to 0.25%, to May 2022 from August 2022.

“We do think it’s more likely than not that some moderate tightening of policy … will be necessary,” BoE Deputy Governor Ben Broadbent told businesses on Friday, adding that he would be paying particularly close attention to labour shortages.

Since the BoE’s announcement, two-year gilt yields – which are sensitive to expected changes in the BoE’s Bank Rate – have risen 8 basis points, their biggest two-day rise since February.

Ten-year gilt yields recorded their biggest daily gain since March, rising 9 basis points, and touched their highest since July 22 at 0.623%.

“Today’s non-farm payrolls release, and recent news on the bipartisan U.S. infrastructure bill, add some weight to our view that the past week’s climb in U.S. Treasury yields and steepening of the yield curve have further to run,” said Oliver Allen, markets economist at Capital Economics.