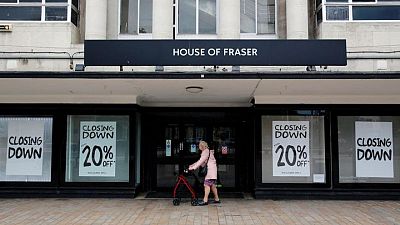 LONDON -Mike Ashley, one of Britain’s best known and most outspoken business leaders, is set to step down as chief executive of the sportswear retail group he founded nearly 40 years ago, handing the baton to his daughter’s partner.

Passing on the CEO position to his future son-in-law, Michael Murray, is a typically unconventional move from Ashley.

His frank comments about rivals and politicians, a love of casinos, stories of settling banker fees by playing bar games and clips on YouTube showing him sinking a pint of beer in a few seconds have fed an image of a maverick far removed from the typical British business chief.

Frasers Group, formerly called Sports Direct, announced the move on Thursday, saying that its board was in talks to “transition” the CEO role from Ashley to Murray, the group’s current “head of elevation” over the course of the 2021-22 financial year.

“It is currently proposed that Michael Murray will assume the role of CEO on 1 May 2022,” Frasers said.

Ashley, 56, is not, however, going away. Frasers said that if he did give up the CEO role he would remain on the board as an executive director. He also retains 64% of the group’s equity.

Ashley, who started out with a sports store in a town west of London in the 1980s, took over the CEO role in 2016. That was the same year that lawmakers criticised the group for “Victorian” working conditions and investors and media highlighted its poor corporate governance.

Sports Direct responded by becoming more open and told workers they would receive back pay after wages fell short of a legal minimum.

Ashley had held the title of executive deputy chairman when Sports Direct floated in 2007 until 2016.

He is also the owner of Premier League soccer club Newcastle United but is unpopular with some supporters who are demanding more investment and has been trying to sell the club.

Though Murray, 31, does not currently sit on Frasers’ board, his job has made him central to the group’s plans to modernise and go upmarket – the elevation strategy.

Ashley’s long-stated desire is to make Frasers the “Selfridges of sport”, emulating the status of the London department store. It had previously had a reputation for selling goods at bargain prices in large warehouse-style stores.

“Ashley has often been unpredictable, outspoken and uncooperative, so Murray might bring a sense of order to the boardroom,” said Russ Mould, investment director at AJ Bell.

Frasers reported a 29.4% rise in core earnings in the year to April 25 as a strong online performance offset a hit from store closures due to the COVID-19 pandemic.

Underlying earnings before interest, tax, depreciation and amortisation (EBITDA) were 390.8 million pounds, up from 302.1 million pounds in 2019-20, despite an 8.4% decline in revenue to 3.6 billion pounds.

Frasers said its UK stores have performed above expectations since reopening after lockdown and its online operation has continued to “significantly outperform” pre-COVID-19 periods.

However, it said it was not giving guidance for the 2021-22 year due to uncertainty caused by the pandemic.

“Management remains of the view that there is a high risk of future Covid-19 pandemic restrictions, likely to be over this Winter and maybe beyond,” it said. ($1 = 0.7207 pounds)