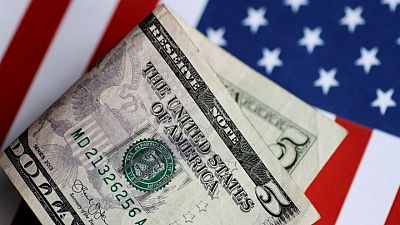 BENGALURU – After a recent spill, the dollar looks a bit rudderless, waiting for direction on U.S. monetary policy, according to foreign exchange strategists polled by Reuters who predicted the currency will have ceded more ground 12 months from now.

Having fallen from a 15-week high set a fortnight ago, the dollar is still up over 2% for the year, although that gain is expected to be erased within 12 months.

“The base presumption is…fairly rangebound from here, but it entirely depends on what we see happening in terms of fiscal or monetary policy,” said Michael Every, global strategist at Rabobank. “This is where FX forecasting becomes something of a joke: you’re forecasting one thing based on another thing.”

At its July meeting, the Fed offered no clear path on when it would begin to taper its $120 billion in monthly asset purchases. Markets are looking to the annual meeting at Jackson Hole that the Fed will host later this month for any hints.

The Aug 2-4 poll of over 60 foreign exchange strategists showed expectations for the dollar to weaken against most major currencies in 12 months, a broad view they have held for over a year.

Over 55% of forecasters, 36 of 63, who answered an additional question said volatility in currency markets over the next three months would increase. Twenty-three said it would stay the same and only four said it would decrease.

The dollar has followed no particular pattern in recent months, from tracking higher U.S. Treasury yields to attracting safe-haven flows, wrong-footing speculators who had placed large bets against the currency.

While the latest positioning data showed net dollar longs rising to their highest level since early March 2020, the currency is down about 1% from last Monday.

“The dollar on the whole has been disappointing. Most people started the year expecting dollar weakness as we did. It is up a bit for the year, but not enormously higher – the market has been driven up by the sort of hard-to-price uncertainty related to COVID variants,” said Steve Englander, head of global G10 FX research at Standard Chartered.

“The dollar strength we’re seeing is largely safe-haven,” he added, referring to its broad resilience.

Other safe-haven currencies like the Japanese yen and the Swiss franc, which have underperformed for the year, were up 1.3% and 2.2%, respectively, last month.

Reuters poll graphic on the outlook for EUR/USD, USD/JPY, GBP/USD and USD/CHF https://fingfx.thomsonreuters.com/gfx/polling/akvezgydjpr/Major%20graphics%20for%20fx%20poll.PNG

In the meantime, Fed policymakers have been giving mixed signals on the timing of the taper, or winding down of its monetary stimulus program.

“The Fed didn’t give any indication they’re going to taper recently but a few people in the Fed are saying they are,” said Rabobank’s Every. “So, which one is the real voice? Which one is the actual Fed speaking?”

Analysts appeared split not just on the timing of the taper but what that would do to the dollar.

“As long as they (the Fed) don’t see inflation priced into labor markets and elements of wage price cycles, they’re going to treat it as transitory. So all of that is risk positive and dollar negative,” said Standard Chartered’s Englander.

“We think the Fed is getting closer to announcing tapering. For example, yesterday, one of the FOMC team members called for more rapid tapering…that kind of prospect of the Fed tightening should benefit the dollar,” he said.