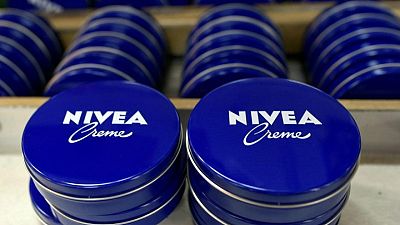 BERLIN – Nivea maker Beiersdorf’s sales rose above pre-pandemic levels as demand for adhesives and its dermatological brands roared back, pushing the shares up by more than 5% in early trade on Thursday.

Organic sales jumped 28.3% in the second quarter to deliver growth for the first half of 16.2%, achieving 3.87 billion euros revenue, a tad above the consensus estimate of 3.82 billion according to Refinitiv IBES data and the 2019 first-half figure of 3.84 billion euros.

Analysts at Jefferies said those figures “handsomely” beat their forecasts, driven by growth in the Nivea, La Prairie and Derma brands.

The Hamburg-based firm said it expects its 2021 group sales to rise by a high single-digit percentage, having previously said that it saw positive sales growth for 2021.

“This is the momentum we want to use going forward,” Beiersdorf’s new Chief Executive Vincent Warnery said in a statement.

Under his predecessor Stefan de Loecker, Beiersdorf invested more in its consumer business to revive slowing sales growth and bought U.S. sun care brand Coppertone from Bayer for $550 million to strengthen its position in North America.

Beiersdorf’s first-half margin on EBIT (earnings before interest and tax) widened to 15.3% from 13.7%. For the full year, however, it expects the margin to remain flat around 2020’s level of 12.9% due to rising material prices and investments in digitisation and innovation.

Bernstein analyst Bruno Monteyne warned that Beiersdorf’s guidance implied a slowdown in the recovery in the second half of the year along with an “almighty reduction” in profitability.