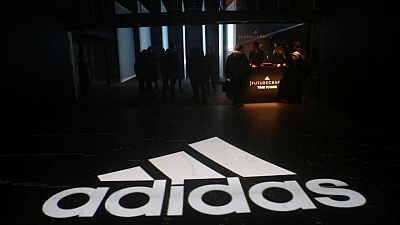 BERLIN -Adidas felt the impact of a Chinese boycott of Western brands on its second-quarter results on Thursday and is also suffering from the closure of factories in major supplier Vietnam due to rising COVID-19 infections.

The German sportswear company still raised its outlook for full-year sales and profitability as it said it has seen demand recover in China since calls for a boycott in late March, and said it hopes to restore production in Vietnam soon.

But Adidas shares were down 4.1% by 0950 GMT as analysts noted that its growth was lagging rivals Nike and Puma, which both reported that sales nearly doubled in recent earnings releases.

Second-quarter sales at Adidas rose 52% to 5.077 billion euros ($6 billion), while operating profit came in at 543 million euros, ahead of analysts’ average forecasts.

Adidas raised its 2021 outlook to predict sales will grow up to 20%, and net income from continuing operations will reach 1.4-1.5 billion euros. That compared to Puma’s forecast for sales to rise at least 20% for 2021.

The new Adidas outlook assumes that the sourcing network will be back to normal by the end of September and that the company will continue to see a steady recovery in Greater China, where sales fell 16% in the second quarter.

Western brands including Adidas faced online attacks in China in late March over past statements saying they would not source cotton from Xinjiang after reports of human rights abuses against Uyghur Muslims. Beijing denies any such abuses.

The company hopes to be able to restart production in Vietnam after the scheduled end of a coronavirus lockdown on Aug. 15 and is working on reallocating production to other centres in the meantime.

Vietnam usually accounts for 28% of Adidas sourcing and its factories mostly make shoes for the company, with a lag of three to four months before products hit the shelves.

The combined impact of supply chain problems, new COVID-19 lockdowns in Asia and tensions with China could amount to more than 500 million euros in lost sales in the second half, said finance chief Harm Ohlmeyer.

Ohlmeyer added he expects Adidas to seal a deal to divest the underperforming Reebok brand by the end of the summer.