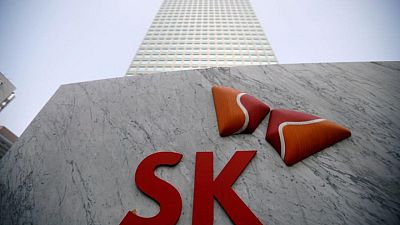 By Heekyong Yang and Joyce Lee

SEOUL – SK Innovation Co Ltd confirmed plans to make its battery business a stand-alone unit, sending its shares down as much as much as 7.9% in morning trade to hit a near four-month low.

Analysts said investors were concerned that SK Innovation would be left with its less attractive conventional petrochemical business once the battery business is separated.

The owner of South Korea’s top refiner SK Energy posted an operating profit of 506 billion won ($441 million) in the April-June quarter, compared with an operating loss of 456 billion won in the same period a year earlier.

The company said it expected refining margins to gradually improve in the second half as COVID-19 retreats and demand rebounded.

It would separate out its battery business and oil and gas production business into individual units by October. The new entities would continue to be wholly owned by SK Innovation.

“These split-offs are meant to preemptively strengthen fundamental competitiveness by building a management system suitable for the characteristics of each business,” Kim Jong Hoon, SK Innovation’s board chairman, said in a statement.

In July, SK Innovation said it was considering separating and listing its growing battery business unit, which supplies electric car batteries to Volkswagen and Ford Motor Co among others, to better secure resources as the global EV market continues to grow.

The battery unit, which is aiming to turn profitable next year, accounted for nearly 6% of the company’s revenue in the second quarter.

Revenue rose 56% to 11.1 trillion won from a year earlier. That compares with the 11 trillion won forecast of analysts in the Refinitiv SmartEstimate.

SK Innovation, which has a total refining capacity of 1.115 million barrels per day (bpd) at plants in Ulsan and Incheon, said it operated it facilities at 66% of capacity on average in the quarter, down from 77% during the same period a year earlier.

Last week, South Korea’s third-largest refiner S-Oil Corp said refining margins are expected to rebound in the third quarter, driven by high demand for transport fuels because of an increase in global economic activities and mobility.