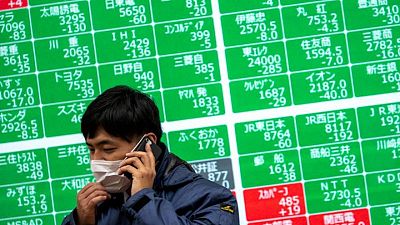 BOSTON -Stocks, Treasuries and other major markets were mixed on Wednesday after July data showed that U.S. jobs growth slowed but demand for services increased, all as Federal Reserve officials signaled a likely pullback in market support.

At the same time, the Nasdaq Composite added 19.24 points, or 0.13%, to 14,780.53, with big technology stocks such as Netflix Inc, Amazon.com Inc and Facebook Inc outperforming.

Tengler pointed to the positive growth indicators from manufacturing inventories and demand for services, but cited concern over COVID-19 in China and related economic slowdowns.

The Institute for Supply Management said on Wednesday its non-manufacturing activity index hit 64.1 last month from 60.1 in June, the highest reading in its history.

Strong corporate profits have recently eased concerns over the coronavirus pandemic. Nearly 90% of the 377 S&P 500 Index companies that have reported earnings for the second quarter have come in above analyst expectations, the highest on record since 1994, according to Refinitiv data.

But investors are also weighing inflationary pressures and a growing belief that the Federal Reserve may soon trim support for the economy.

Federal Reserve Vice Chair Richard Clarida said on Wednesday that the U.S. economy is on track to meet the employment and inflation hurdles that the Federal Reserve has set for raising interest rates in 2023, echoing comments by other officials.

“While the economic recovery has been exceptional by historical standards on account of massive fiscal and monetary policy, peak accommodation is likely behind us, and as a result, peak growth may be as well,” BofA Global Research strategists wrote in a new report.

“Fiscal policy in the U.S. is likely to fall short of expectations and the exogenous risk of the Delta variant remains,” the report added.

Oil prices fell for a third day in a row to a two-week low on Wednesday on a surprise build in U.S. crude stockpiles, the negative U.S. economic report and worries that the spread of the coronavirus Delta variant will weigh on global energy demand.

The dollar recovered from a fall on Wednesday brought on by the jobs data. After a steady day, the dollar index against major currencies fell as much as 0.2% before turning back up. The dollar index was up around 0.26% as of late afternoon.