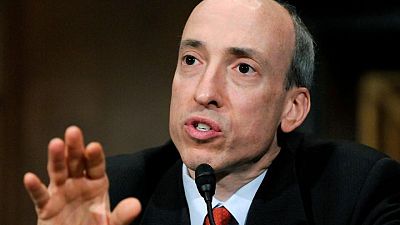 WASHINGTON -The chair of the U.S. Securities and Exchange Commission (SEC) on Tuesday called on Congress to give the agency more authority to better police cryptocurrency trading, lending and platforms, a “Wild West” he said is riddled with fraud and investor risk.

Gary Gensler said the crypto market involves many tokens which may be unregistered securities and leaves prices open to manipulation and millions of investors vulnerable to risks.

“This asset class is rife with fraud, scams and abuse in certain applications,” Gensler told a global conference. “We need additional congressional authorities to prevent transactions, products and platforms from falling between regulatory cracks.”

Cryptocurrencies reached a record capitalization of $2 trillion in April as more investors stocked their portfolios with digital tokens, but oversight of the market remains patchy.

The industry has been waiting with bated breath to see how Gensler, a Democratic appointee who took the SEC helm in April, will approach oversight of the market, which he has previously said should be brought within traditional financial regulation.

On Tuesday, Gensler provided more insight on his thinking, saying he would like Congress to give the SEC the power to oversee cryptocurrency exchanges, which are not currently within the SEC‘s remit.

He also called on lawmakers to give the SEC more power to oversee crypto lending, and platforms like peer-to-peer decentralized finance (DeFi) sites that allow lenders and borrowers to transact in cryptocurrencies without traditional banks.

“If we don’t address these issues, I worry a lot of people will be hurt,” Gensler said.

Democratic Senator Elizabeth Warren has been pressing regulators to get a grip on the market, which she described in a July letter to Gensler as “highly opaque and volatile.”

Gensler responded by asking Congress to consider granting him more autonomy to regulate the sector.

On Tuesday, he also underscored that “stock tokens, a stable value token backed by securities, or any other virtual product that provides synthetic exposure to underlying securities … are subject to the securities laws.”

Kristin Smith, who runs the Washington-based Blockchain Association said that while the crypto industry is eager to help find “workable solutions” to the SEC‘s concerns, it does currently comply with oversight by state authorities and other federal regulatory bodies.

“The industry shares many of Chair Gensler’s goals, including smart, appropriate regulation of the crypto industry, encouraging legal certainty, robust market integrity, and investor/customer protection,” Smith said in a statement.

“Where we differ with Chair Gensler is his characterization of the growing crypto economy as the ‘Wild West,’ Smith said. “The crypto industry is far from unregulated.”