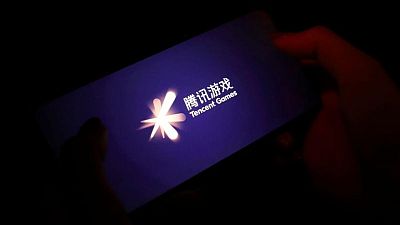 SHANGHAI/SINGAPORE – Bewildered investors in China’s tech sector scrambled once again from regulators on Tuesday, fearing that a state media story that likened internet gaming to opium signals a new front in the barrage of scrutiny that is being directed toward big business.

The article was later altered to remove the historically loaded opium reference, but, together with the opening of a probe into automotive chip distributors, it roiled markets still smarting from a panic sell-down a week ago.

Tencent, the social-media-to-gaming behemoth, fell 6% and was briefly knocked from its mantle as Asia’s most valuable company, while semiconductor stocks slid as the moves seemed to unwind authorities’ days-old promise of a calmer hand.

“People want to know when it’s time to buy, but there’s not yet something concrete in the rules to find as a floor.”

China’s State Administration for Market Regulation said it had launched an investigation into auto chip distributors because it suspected price gouging.

The state-media article that sparked Tuesday’s tech selling, published in the Economic Information Daily, mentioned a Tencent video game and called for more curbs to address children’s’ addiction to games it initially described as “spiritual opium”.

The outlet is affiliated with China’s biggest state run news agency, Xinhua. The article soon disappeared from the paper’s website and WeChat – and Tencent’s stock rebounded a little – then it later re-appeared minus the “spiritual opium” line.

It was not clear why it was altered, though opium addiction is a sensitive subject in China where it was widespread in the nineteenth century, sparking two Opium Wars and the ceding of Hong Kong island “in perpetuity” to Britain. Traders took the deletion as softening the attack – even if that was only cold comfort.

“Most will be inclined to believe there’s no smoke without fire,” said Dave Wang, a portfolio manager at Nuvest Capital in Singapore, which owns Tencent stock, of the vanished story.

“There’s expectation of a further tightening on the gaming sector,” he added. “There are plenty on the sidelines waiting for clarity on when this crackdown will finally come to a close before any more meaningful investments into China.”

Investors believe a major shift is under way in China as the government aggressively pursues reform aimed at cutting cost-of-living pressures at the expense of businesses.

Chaotic selling last week, triggered by leaked details of an education-sector crackdown, capped the worst month for Chinese stocks in nearly three years as investors worried about where the next target may lie.

China’s securities regulator, in a meeting with foreign brokerages last week, had sought to soothe fears with a promise of a steadier reform rollout, yet Tuesday’s news sparked fresh concern that nowhere is safe.

“They don’t believe anything is off limit and will react, sometimes over-react, to anything on state media that fit the tech crackdown narrative.”

The nerves have coincided with a slowdown in China’s economy – factory activity grew at its slowest pace since February 2020 last month – adding to a broad sense of caution in markets even among investors who say the crackdowns are manageable.

“We see little global spillover risk from China’s assertion of greater control over certain industries, even as it potentially leads to market volatility,” analysts at BlackRock Investment Institute said in a note.

“We remain tactically neutral on China stocks and see further monetary and fiscal policy loosening as beneficial for cyclical assets in China.”