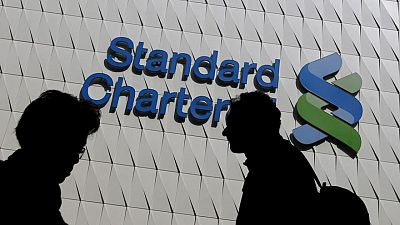 HONGKONG/LONDON -Standard Chartered PLC reported a higher than expected 57% jump in first-half profit and $350 million worth of shareholder payouts, but a fall in revenue showed the longer-term struggle ahead for the bank.

StanChart announced a $250 million share buyback and resumption of interim dividend payments worth 3 cents per share, or $94 million in total, joining other banks in rewarding shareholders after year-long regulatory curbs on payouts were removed last month.

However, its income fell 5% thanks to low interest rates, which the bank said it hopes are bottoming out, and due to declining revenue in its cash cow transaction banking business.

Having spent the early years since his appointment in 2015 fixing StanChart’s battered balance sheet and slashing costs, Chief Executive Bill Winters has in recent years tried to restore growth.

The results of those efforts have been mixed, as affirmed by the bank’s latest report.

The Asia, Africa and the Middle East-focused bank is looking to capitalise on rising trade between those regions, as well as grow fee-based businesses such as wealth management to compensate for rock-bottom policy rates worldwide.

Pretax profit for StanChart rose to $2.55 billion in January-June from $1.63 billion in the same period last year, the London-headquartered bank said, slightly above the average of analysts’ forecasts.

“We believe that we will soon be back on the same performance trajectory that we were on before the pandemic set us back,” Winters said.

The bank hopes to grow income annually by about 5%-7% from 2022 onwards, he said, without providing a time-frame.

“Its significant position in the trade finance market gives the bank a degree of economic sensitivity that may not always be welcome, but is a useful tailwind when economies are reopening as they are at present,” said Nicholas Hyett, equity analyst at Hargreaves Lansdown.

The bank’s shares rose 1.2% in London, among the 10 best performers in the benchmark FTSE index, after its Hong Kong-listed stocks earlier fell 1%.

StanChart posted a record performance in its wealth division, with income up 23% to $1.2 billion, thanks to strong product sales through its new digital channels.

Its profit was also boosted by a release of $67 million it had set aside to cover a potential increase in bad loans due to the pandemic, after taking a further $20 million charge in the first three months of the year.

However, StanChart released less than rival HSBC, which benefited from a larger presence in markets like Britain that have recovered faster than elsewhere thanks to high vaccination rates.

StanChart’s profit rebound was also less than those of Wall Street peers and British rivals HSBC and Barclays, as income in its core cash management and trading businesses slumped.

Costs rose 8%, mainly due to higher pay for bankers as StanChart, in common with its rivals, boosted bonuses to try and retain key staff as banks’ profits rebound.

“We are prepared to do buybacks but only if there are not more valuable ways to deploy that capital,” Chief Financial Officer Andy Halford told analysts, saying that the bank would consider bolt-on acquisitions in core markets.

The bank also set out three areas in which it said it will use its clout to help tackle global societal issues, namely climate change, women’s rights and access to credit for small businesses, and “giving more people the chance to participate in the world economy”.

StanChart said it will set long and near-term goals and that this would not be “philanthropy” but commercial investment.