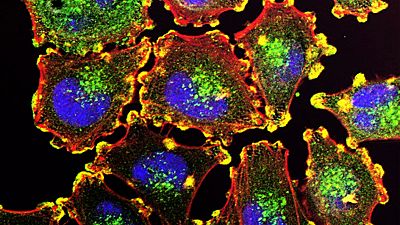 Researchers at the Massachusetts Institute of Technology (MIT) have created a nanoparticle diagnostic tool that can detect cancer cells in urine.

The tool, invisible to the naked eye at less than 100 nanometres wide, could also be modified to work as an imaging agent to highlight a confirmed cancerous tumour’s location from a scan.

According to the researchers, the nanoparticle tool, once approved for human use, could be incorporated into routine medical urine tests to screen for traces of cancer cells.

If cancer is found, the patient could be given the nanoparticle to ingest before undergoing a Positron Emission Tomography (PET) imaging scan to find the source of the disease.

Tracing the spread of the disease

Here, the tool would work combined with a radioactive ‘tracer’ compound called copper-64 that’s usually swallowed, inhaled or injected, and which detects cancerous cells and tracks the path back to their source.

The world-renowned science and technology institute said the nanoparticle could in principle be used to detect cancer anywhere in the body - including tumours that have spread from their primary location, a process known as 'metastasis'.

Professor Sangeeta Bhatia, the team leader of the MIT project, saw it as especially suited for evaluating patient response to treatment and for long-term monitoring of recurrent tumours, particularly for colon cancer, after the study showed the nanoparticle traced the spread of metastatic tumours to the lung and the liver in mice.

"This is a really broad sensor intended to respond to both primary tumours and their metastases,” Bhatia said.

"It can trigger a urinary signal and also allow us to visualise where the tumours are.

Those patients could be monitored with the urinary version of the test every six months, for instance.

"If the urine test is positive, they could follow up with a radioactive version of the same agent for an imaging study that could indicate where the disease had spread. We also believe the regulatory path may be accelerated with both modes of testing leveraging a single formulation".

A breakthrough for cancer diagnostics

The development of a tool for detecting cancer that could be used as part of a simple urine test marks a breakthrough in cancer diagnosis.

Oncologists typically use imaging techniques like CT scans, mammograms, and colonoscopy to detect the disease.

According to MIT, the study - which has been published in the journal Nature Materials - proved the dual success of the nanoparticles using mice.

It also said phase 1 clinical trials of an earlier version of the urinary diagnostic particles performed by Glympse-Bio, a company co-founded by Bhatia “found them to be safe in patients”.

The significance of nanoparticles in medicine has grown in recent years as their miniature properties have been harnessed for improving contrast in imaging and delivering drugs and genes directly into tumours.

By virtue of their size, nanoparticles behave differently from bigger materials in terms of how they absorb energy and react with chemicals.

This means they have often played a crucial role in scientific discoveries that could not have been made without their use.