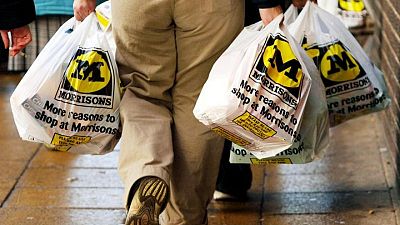 At 272 pence per share, Morrisons’ stock has jumped well above the 252 pence recommended offer from Softbank-owned Fortress. CD&R has until next Monday to make a counter bid. Investors are due to vote on the Fortress bid on Aug. 16.

The battle for Britain’s fourth-largest supermarket is the most high-profile looming takeover in the country amid a raft of bids and counter bids, reflecting private equity’s appetite for UK Plc and the cash-generating capabilities of well-run supermarkets.

Clayton, Dubilier & Rice (CD&R) sparked speculation it would return with a higher offer for Morrisons when it did not exit the picture following the rejection of its earlier 230 pence a share offer, instead keeping its options open.

It would likely have to match Fortress’ commitments to retain the company’s strategy and management, and could talk up the experience its senior executives would bring to the table, including adviser Terry Leahy and partner Vindi Banga.

Leahy, who became a senior adviser to CD&R in 2011, spent 32 years at Britain’s biggest supermarket Tesco , including 14 as CEO. Banga, a partner at the U.S. group, spent 33 years at Unilever, a key food and drink supplier.

CD&R could also justify a higher price if it seeks an operational tie-up between the supermarket and the independent petrol station and convenience retail operator it owns, Motor Fuel Group, which could lead to Morrisons-branded forecourts.

Morrisons rival Asda was recently bought by entrepreneurs, the Issa brothers, and TDR Capital, which combined its petrol stations with an existing petrol business they owned.

Morrisons however is so far set on the offer from Fortress, which is backed by Singapore’s sovereign wealth fund GIC, Canada Pension Plan Investment Board and Koch Real Estate Investments.

It has described them as suitable owners for a business with more than 110,000 staff and a deeply integrated supply chain, that includes for example its own meat and fish processing sites. Morrisons is unique among British supermarkets in making half of the fresh food it sells.

But major Morrison shareholders do not appear to agree, with Silchester and M&G indicating the offer is too low.

William Woods, an analyst at Berstein, said in a note that any buyer making a higher bid would likely have to sell off additional assets, such as factories, warehouses or stores, to make a return. “We struggle to see the returns of the current offer without significant asset sales,” he said.

To pass, the offer needs the support of shareholders representing at least 75% in value of voting investors at the meeting.