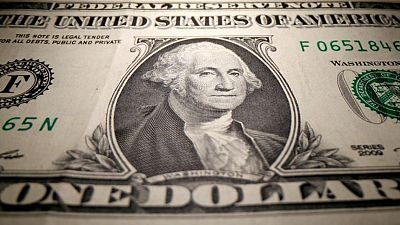 (Fixes spelling of “wavers” in headline)

The dollar index =USD, which measures the currency against six major peers, was down less than 0.1% at 92.05 in the afternoon in New York after having been down about 0.2% on the day.

The index last week dropped 0.9%, the dollar’s worst week since early May, as it turned away from the previous week’s 3-1/2-month high when traders were positioning for a speedy start of Fed tapering of support for the economy.

“The U.S. dollar has begun August with a heavier tone as risk appetites rebuild,” Marc Chandler, chief market strategist at Bannockburn Global Forex, said in a note to clients.

But the additional risk appetite in the dollar seemed satisfied after U.S. 10-year Treasury yields fell and stocks lost momentum after a report in the morning that U.S. manufacturing activity grew in July, but at a slower pace.

The U.S. manufacturing report reinforced the idea that growth may have peaked.

The euro was up less than 0.1% on the day at $1.187 EUR=EBS. It showed little reaction to a Purchasing Managers Index (PMI) reading of July manufacturing that had been seen as a possible mover.

The British pound also little changed at $1.389, ahead of a Bank of England meeting later in the week.

The recent move away from the dollar hardened after dovish comments from Fed officials indicated that lower interest rates and tapering of support for the economy will probably not come as quickly as markets had begun to expect.

In comments last Wednesday, following a meeting of Fed policy makers, Fed Chair Jerome Powell said considerations of higher interest rates were “a ways away.” The tone was affirmed on Friday when Fed Governor Lael Brainard said Friday “employment has some distance to go” to improve enough for the Fed to back away from support for the economy.

Currency markets seemed ready to hold off on bigger moves ahead of the U.S. July nonfarm payrolls report, due on Friday. Another possible turning point could come at the end of this month when central bankers meet for an annual symposium in Jackson Hole, Wyoming. Fed officials could use the forum to shift, or affirm, their tone.

A dollar rally “is unlikely to resume in force until a more hawkish Fed narrative takes hold,” Win Thin, global head of currency strategy at Brown Brothers Harriman, said in a note. He added that he is bullish on the dollar and said he expects strong economic growth into the third quarter.

NatWest analysts said “exit strategies” from government and central bank support programs, as well as new lockdowns, will drive currencies in the near term. Investors will be watching this week’s meetings at the Bank of England and Reserve Bank of Australia.

While sterling is supported by the possibility of an early end to BOE stimulus, the Australian central bank could well backtrack on its previous decision to taper stimulus, as protracted COVID-19 lockdowns weigh on growth.