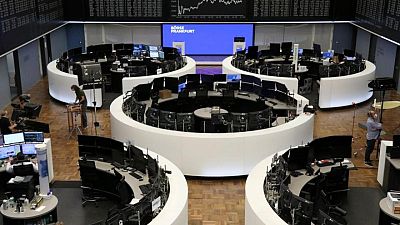 -European stocks ended at a new peak on Monday, as increased dealmaking activity and a batch of strong financial sector earnings helped markets mark a strong start to August.

The pan-European STOXX 600 index rose 0.6% to end at a record closing high of 464.45 points, with retail and technology stocks serving as the best performers.

British aero-engineer Meggitt soared 56.7% to the top of the STOXX 600, hitting a record high after U.S. industrial firm Parker-Hannifin said it would buy the UK rival in a deal valued at $8.76 billion.

Among other deals, British asset management services provider Sanne Group jumped 7.6% after it said it could get a takeover bid from fund servicer Apex Group.

Of the more than half of the STOXX 600 companies that have reported second-quarter results so far, 67% have topped profit estimates, as per Refinitiv IBES data.

“Having reached all-time highs post 1Q results, the breadth of positive EPS revisions in Europe remains very strong both in absolute terms and versus peers,” European equity strategists at Morgan Stanley said in a note. “Europe now sees the best earnings revisions of all global regions.”

Optimism around European earnings and economic reopening helped the benchmark STOXX 600 end July with a sixth straight month of gains despite concerns about inflation, soaring virus cases in Asia and a major regulatory crackdown in China.

Meanwhile, a survey showed manufacturing activity across the euro zone continued to expand at a blistering pace in July, but supply bottlenecks sent input costs soaring.

British jet and auto parts supplier Senior Plc jumped 9.3% after it reported a first-half profit compared with a loss a year earlier.

The world’s second-largest brewer Heineken inched up 0.6% after reporting first-half earnings above expectations, but warned rising commodity costs would eat into margins.