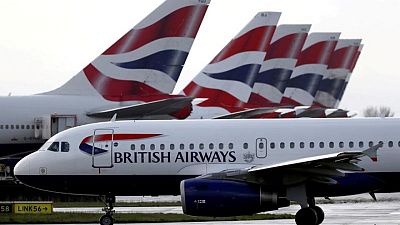 LONDON -British Airways-owner IAG said summer capacity would rise to 45% of pre-pandemic levels, a more cautious bet than rivals as its transatlantic business has yet to fully reopen.

IAG‘s 45% Q3 capacity plan is a significant jump over the 22% it flew in the March-June quarter, but puts it some way behind Air France-KLM, easyJet and Ryanair, which IAG‘s CEO blamed on the partial closure of the U.S. market.

“The weight of our network is balanced to the Atlantic,” Chief Executive Luis Gallego told reporters on Friday, adding that it was possible that IAG would beat its 45% plan this quarter.

“That’s what we think we are going to fly, but we are ready to fly more,” he said.

For the October-December quarter, IAG was ready to fly up to 75% of its 2019 capacity, he said.

British Airways, usually IAG‘s most profitable airline, has been hammered by restrictions in its home market that have been tighter and lasted longer than those in Europe, allowing the group’s Spanish airlines Iberia and Vueling to recover faster.

They are set to fly around 70% of their capacity this summer, showing how UK restrictions and last minute rule changes have dragged on BA.

Shares in IAG traded down 3% in early deals. The stock has gained 24% over the last six months.

“Further opening up of the U.S. market during Q3, which may yet happen, would be a significant catalyst for the stock,” said Bernstein analyst Daniel Roeska.

Air France-KLM, which compared to BA has benefited from the earlier opening of Europe to U.S. passengers, said on Friday it expected third quarter capacity at 60-70% of 2019 levels.

Short-haul rivals EasyJet and Ryanair are also ahead of IAG, aiming for 60% summer capacity and July passenger numbers at two-thirds of 2019 levels respectively.

Low levels of flying due to ongoing pandemic restrictions meant that for the three months to the end of June, IAG reported an underlying operating loss of 1.045 billion euros ($1.24 billion), in line with a consensus forecast for a 1.036 billion euros loss.

The group declined to give a profit forecast, citing COVID-19 uncertainty. It said it had liquidity of 10.2 billion euros and it continued to preserve cash by reducing its cost base.

Asked if there could be further redundancies after BA last year announced more than 10,000 jobs would go, Gallego said that was not what he expected, but that he would like to see the UK furlough scheme extended to the end of 2021.