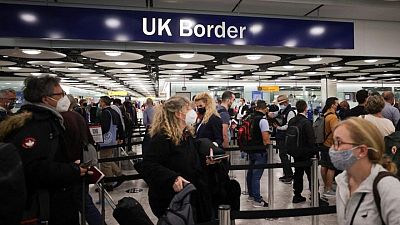 LONDON -Britain’s transport minister said on Friday it was essential to have painful travel restrictions and a cautious approach to countries such as France to avoid the spread of a coronavirus variant that vaccinations might be less effective against.

The UK government two weeks ago decided to maintain quarantine rules for double-vaccinated travellers from France, even as it scrapped the requirement for travellers from other medium-risk “amber” countries, citing concern over cases of the Beta variant.

France has cast England’s quarantine measures for travellers as discriminatory and not based on science as the bulk of France’s Beta variant cases come from the island of La Reunion in the Indian Ocean.

“I know it’s painful, but I think that generally speaking, your viewers probably want to see us be cautious rather than sort of gung-ho on this and that’s exactly what we’re trying to do.”

Asked about the row with France, one of Britain’s favourite travel destinations, Shapps said he hoped the situation could be “regularised”.

“We do not want to take chances or risks, particularly, having done so well with vaccination programme with per chance, you know, a variant which is able to better evade vaccination which would be tragic having gotten to where we are now,” he told the BBC.

“We are on the cautious side of that, I recognise that, but I hope that over time we will be able to regularise the position with France, but we will have to be a bit patient. Next week will be the first opportunity to look at that.”